For The Seriously Mad

Show report - day two. Doggo is not hitting the contacts at the moment, probably due to lack of training. So that cost us two runs today. He's booked in for a refresher course from September. He was clear in his jumping though. It was a good run but again no rosette.

I missed one of MD’s runs completely as I was too busy working. The two runs he got included a truly awful one and a good one, where he was clear up to obstacle 12 but then didn't even see the weaves and went for a hurdle instead. So we picked up faults for that. I’ve not had much time to concentrate on running them this weekend due to ring managing both days. I’m hoping for better tomorrow when I don't have to work on the rings.

At lunch time I nip over to Burton, a few miles away, and collect L, who has managed to use public transport to get that far. Then when the agility has finish we move to a different part of Catton Park where the Thunder Run is taking place. It’s a 24 hour running race where the aim is to do as many laps of the 10k cross country course in the time allowed. It starts a 2pm today and finishes at the same time tomorrow. There is an individual competition for the seriously mad but also a team event for five or more people. L is secretly hoping someone will be injured and that someone will beg her to run.

I need to start persuading a few people, we must do this next year. 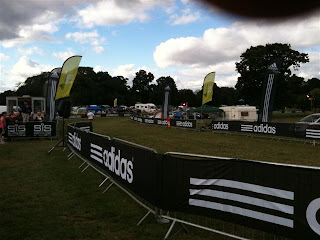