What Was The Point Of That?

I’m on the bike this morning and as the mornings are now so much lighter, I can now start taking my preferred route again. This is the hillier route, which might be useful as some training for the Cat. Well I hope it's going to be useful, I don't have much time to do much more.

Have a few problems as usual. I’m cycling down to the lights in Spondon, doing around 25mph, the same as the queuing cars. I’m a few feet away from the curb, to keep my place in the queue, as I'm going to turn right. Most drivers understand this but today a car is desperately trying to overtake me, to gain a metre or so on the road. Well there's no room, I'm practically on the bumper of the car in front but he's going to do it anyway and push me out of the way. I hit the brakes and slow up to let him in. What was the point of that? Then the **** turns left across the front of me. Cheers.

In the evening its squash and I get carried away. I launch myself into the match from game one. Discarding my cunningly thought out plan that had worked well for the last few weeks. The tactic is supposed to be to wear my opponent down gradually, and not tire myself out, before I take a game off him. With that plan in tatters we have some fantastically close games but I don’t win any of them and get a blow to the head from my opponent’s racquet into the bargain.

No chance of any sympathy at home, L’s gone to the cinema. She said I wouldn’t be interested because it’s a romance and it’s Jennifer Anniston, she’s forgetting that I’ve seen ‘Marley’. Anyhow the Jennifer thing was just a red herring. Apparently Gerard is the reason she’s going, which doesn’t mean much to me... 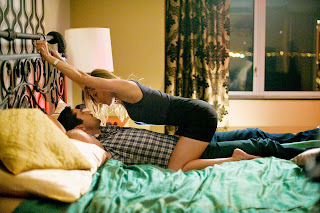 Just in case the inspiration is half as good as last night’s Sophie effect, I’ll make sure I’m free later.
Posted by FitForNothing at 5:00 PM