Walking Better Than Me

MD has injured his paw; in fact he’s almost ripped a claw off and just before his second show as well. We cover his bad paw with a sock, a special dog sock that was provided to us for Doggo to do the Sport Relief mile the other year. He looks a bit shocked, when we put it on him, perhaps by the colour. Yes it’s red. Then I think he realises that it will get him the sympathy vote, so he doesn't try and remove it.

He’s still walking better than me though, although I feel I’ve recovered well from yesterday. The legs are a bit stiff but they’re a lot better than last week.

It’s Crufts on Thursday, so in an endeavour to look smart for the TV cameras (highlights on More4 and live online, if you’re interested) I get a haircut. Although after much consideration I decide not to go blonde. Then I head into JJB to look for new tracksuit bottoms. They actually have some good stuff but again mostly in Large, X-Large and XX-Large, just like Sports Direct on Saturday. Racks full of them, so they’re obviously not selling. Which isn’t surprising as it’s all quite technical stuff and pricey too. There’s not much in Medium and I found Medium too baggy anyway for what I wanted. So I had to choose between two styles in Small. Just hope it goes with my team t-shirt that I still haven’t got.

We are supposed to be at one gig tonight and Daughter at another but Lady Gaga has cancelled on her, due to logistical problems. If you google ‘Lady Gaga cancels’ it comes up with loads of gigs she’s cancelled all over the world in the last year for various reasons. She seems to be a bit of a cancelling expert. Apparently she’s been persuaded to do some extra gigs in Australia on this occasion, which is her ‘logistical problem’, she can’t be in two places at once but shouldn’t she have honoured the original dates. Meanwhile L and I are at Rock City for Mr Ego and his band, Liam Fray’s Courteeners.

To be honest, I haven’t been that struck on their new album 'Falcon' and I was actually more looking forward to seeing Detroit Social Club, who I’m quite taken with. A much talked about band, who have been around for a few years, with very little output to show for it but now with an excellent new single out entitled 'Kiss The Sun' which is what they open with tonight and pretty awesome live it is too.

With a name like Detroit Social Club they are obviously from... errmm... Newcastle upon Tyne and sound like a Geordie Black Rebel Motorcycle Club to me. This means I whole heartedly approve of them. It’s an excellent short set from them, where ‘Black And White’, a current free download, is just terrific in the middle of the set. As is the closing 'Sunshine People'. I think it’s all rather powerful stuff but then I was already a convert before tonight. 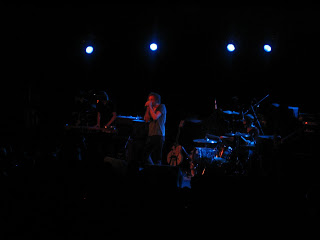 In the other hand I’m still to be totally converted by Liam Fray, I still don’t particularly like the man but I do like his band, so it’s a bit of a shame that he makes the live shows so much about him.

At least I think I've figured out why the Courteeners play the entirety of ‘Rock n Roll Star’ before they come on. It's to tempt people into getting the beer throwing out of the way before the band comes on and gives the crew chance to mop the stage. However it doesn't work. Although an impressive amount is dispatched at this point there's plenty been held back in reserve to be launched when the band take the stage, after the usual protracted delay. Both 'Cavorting' and the following 'Acrylic' are accompanied by industrial quantities of what can only hope is alcohol or water.

The crowd don’t help Mr Fray’s ego by chanting his name far too often for my liking, his heads big enough already thank you very much. When they get bored with that, and with chanting the band’s name, they settle on ‘Nottingham Is Full Of Fun' football style which isn't what they chant Nottingham is full of at Derby's home games but never mind.

Then there’s the crowd surfing, which is even more excessive and extreme than usual, which seems to rile the security who are getting rougher than they probably should be and taking no prisoners. So it’s unclear what causes the few visible injuries that are sustained, the crowd surfing or the unsuccessful prevention of it.

Music wise, the new songs sound much better live than on record and I can see some of them becoming real favourites live. The faithful are already well rehearsed on most of them. Particularly 'Cross My Heart & Hope To Fly' and 'Scratch Your Name Upon My Lips' come across very well.

Liam himself seems a bit miffed at the negative press reaction to the new album and is not backwards in telling us all about it. Perhaps he set the bar too high with ‘St Jude’, where even the not so good tracks are still live favourites. Perhaps even, deep down, Liam agrees because tonight’s 21 song set includes more of the first album than the second, which is unusual for a band promoting a new record.

As usual they wind down towards the end with a trio of solo songs from Liam. During the first, 'The Rest Of The World Has Gone Home', he has to pause to watch as an attractive female crowd surfer is pulled out at the front, then as his pulse returns to normal he continues from where he left off. Following that with ‘No You Didn't, No You Don't’ and ‘Yesterday, Today & Probably Tomorrow’ with full crowd accompaniment. 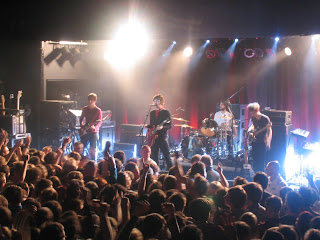 The full band return for the recent single 'You Overdid It Doll' and the traditional set closers of ‘Not Nineteen Forever’ and ‘What Took You So Long?’. It’s all a tad predictable but still very entertaining stuff.
Posted by FitForNothing at 4:00 PM