An Appointment With Doom

I’m so not bothered that I’m missing my first Clumber Duathlon in four years. It’s always been a case of must do purely because there’s nothing else on over that weekend. Well this year I have an appointment with doom tomorrow, Grantham style half marathon doom.

In the morning I end up in Nottingham city centre and shopping, due to an unavoidable optician’s appointment. It's hard though, as I go in to Nottingham so infrequently I no longer know where any of the shops are. I’m trying to get some new tracksuit trousers so that I will to look good on TV on Thursday when I'm at Crufts. Walking trousers would do, so I pop into Blacks. I see that Craghoppers do an ideal pair but they only appear to have them in women’s sizes. I ask the assistant if they have the same style in men’s. ‘Oh yes’ she says and pulls a pair off the next rail. They are not the same; they have big baggy pockets down each leg. I don't need pockets. An agility run is forty seconds at the most, so I don't need to carry supplies or for that matter a map, compass, etc. Well not usually. This is also quite sexists isn’t it, the women’s trousers imply that they aren't expected to carry these things but instead leave that to their men folk. So if women get lost on the hills blame Craghoppers...

Anyhow, I digress, for my intended use for these trousers pockets would just get in the way. The assistant can’t see a problem. ‘Most men prefer the commando look’ she tells me, with a completely straight face. The male assistant behind the desk stifles a laugh. I don't think she knows what she's just implied... although I do know what she meant.

I move on and try Sports Direct, which I knew would be waste of time. Looking at the rails there, they really only stick three sizes. Those being: - Large, X-Large, XX-Large. This is not sports equipment for people who do sport, except from the comfort of their own sofa. There is though a chink of light at the end of the dark Sports Direct tunnel and not many people know this, I certainly didn't, because there are no signs outside the store to tell you this. Up on the top floor they have branches of ‘She Runs He Runs’ and ‘Field and Trek’. Blimey. They even stock things in Small and Medium but I still come away emptied handed.

There’s a victory for Derby today, 2-0 over Watford and then we head over to Lincoln for the first of three gigs in four days. Tonight, Editors.

Support comes from New York band Cold Cave who are on stage when we arrive, standing behind three bands of synthesizers. It’s so 80’s retro, so Gary Numan, except they don’t sound much like him. In fact they sound more like New Order than current media darlings’ Delphic do, who happily sound nothing like New Order despite what the music press say, at least not when they were any good. Cold Cave are early New Order, when they mattered.

One of their members looks like that guy from Sparks, the miserable one, but only because he looks, well, miserable. There’s a girl on another of the synths, plus a drummer and then there’s lead singer, Wes Eisold, behind his keyboard. He’s more into being moody than miserable but they make a good sound. Their obvious 80’s-ness is mixed with a noisier edge which perhaps points to Eisold’s punk/hardcore background.

I love ‘em. Excellent stuff. My kind of electro, move over Delphic. 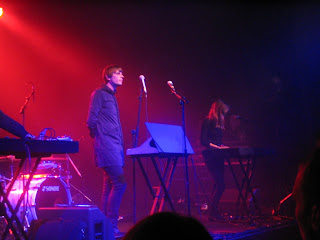 We only saw the Editors in October at the beginning of their 'In This Light And On This Evening' tour, but they were so good, we just had to book to see them again. Well, when I say good; they weren’t quite as good as I expected. On that night they seemed oddly subdued, well Tom Smith did, the crowd certainly were and the track selection irked me a little. So a second chance tonight and boy, did they take it.

What I didn't want them to do was to keep the same format of the set, same start, same end, same encore, as they have been pretty much doing, throughout their jaunt across Europe, the US and even down under. The middle of the set though has been ever evolving and that is the beauty of the Editors, they epitomise what I like in a live band. Their set is likely to include almost anything from their three albums, no track is ever completely forgotten and labelled as ‘we don't play that anymore’ as some bands so. Nothing is too obscure. B sides or tracks off the bonus CDs they often throw in with main albums. 'You Are Fading' is one such track that has become a live favourite. I just felt singled out on the wrong end of track rotation in Sheffield last year.

They start the same, although at first I don’t think they’re going to as Tom Smith himself appears to muck up the intro to 'In This Light And On This Evening' and has to start it again. 'Lights' follows and yes, all the big numbers are present and correct of course, 'An End Has A Start', 'Bones', 'Blood', 'Bullets' etc but what’s this... ‘A Life As A Ghost’ off the Cuttings II bonus CD. Cranky enough for me? Oh yes. I always find a cranky set list much more enjoyable than an obvious one. By the way, 'You Are Fading' is absent tonight, so they’ll get letters of complaint about that, but this allowed room for some cracking diversity. 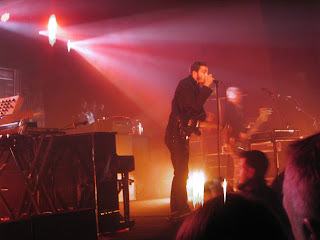 Tonight they also play ‘The Boxer’, the only track off the new album criminally omitted last time. Possibly the best of the more doleful numbers of the new album.

Then there’s ‘Escape The Nest’, a live favourite, not played (just to annoy me) last time, and boy did I take it personally. It’s even more awesome live than on record. I’m one happy bunny tonight. 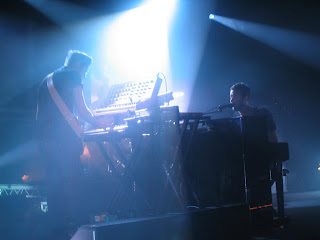 This is followed by much confusion and blank looks all round. I don’t know this one and looking round nor does anyone else. Turns out to be a brand new track called ‘Last Day’, played for the first time tonight. We are honoured and pretty good it sounds too. Of course Tom Smith still introduces nothing. You would have thought at least a few words about this one but no. Still he’s generally just as theatrical tonight as usual. He is not a man who is capable of standing still, literally throwing himself into things, or sitting still for that matter. He’s just as animated when he’s seated at the piano. His hands and body continually trying to embellish the song. He is so into his own songs and tonight, so too are the crowd, right from the start and this makes such a difference to the atmosphere.

Tom is a treat to watch but then so too is Mr Popular, Chris Urbanowicz, whether this be on his Rickenbacker or on the keyboard with the guitar slung across his back. You be forgiven for thinking that some of the words to their songs are ‘Chris Chris Chris’, such is the frequency of their utterance from the crowd near me. 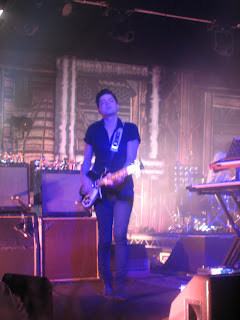 Slightly surprised that ‘Camera’ is still in the set but it’s excellent again tonight. Then we have a really big finish with ‘The Racing Rats’, ‘Smokers Outside The Hospital Doors’ and ‘Munich’ back to back. Playing ‘Munich’ has really stuffed the encore, so it’s got to be different now.

Tom returns on his own and as he tinkles at the piano I think for a moment he’s going to play ‘Distance’ which would have been awesome but no, he gives us a ‘Twilight’ moment, well a ‘Twilight: New Moon’ moment. Their song ‘No Sound But The Wind’ which was part of the soundtrack but has yet not seen the light of day on any of their own releases. 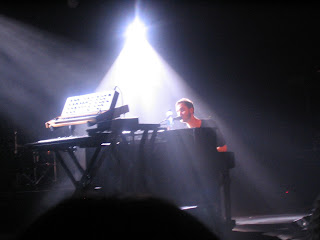 ‘Bricks And Mortar’ lifts the pace a touch before ‘Papillon’ cranks it up further and then Tom turns positively chatty, thanking the crowd generously before ending again with ‘Fingers In The Factories’.

No complaints from me tonight. Ten out of ten.
Posted by FitForNothing at 4:00 PM