The afternoon start means we don’t have to rush getting up, although we do have a 50 minute drive down from Langdale, where we are staying, to Cartmel in South Lakeland. Cartmel turns out to be a very picturesque village which we experience first hand in a traffic jam in the middle of it. We have a map from the organisers that included a detour to keep us away from the village centre but we couldn’t follow it and they didn’t bother to put any signs up. We weren’t the only ones; there were several entrants for the races caught up in the jam, so signs would be a good idea for next year. Cartmel also has very narrow Lakeland lanes; I have the broken wing mirror to prove it.

We’re actually looking for Cartmel Racecourse which you would have thought would be signposted but isn’t, particularly if they don’t like horse boxes gridlocking the village centre. Then suddenly we stumbled across it, wedged in between the houses and the fells is a quaint little racecourse, a far cry from what we have in Nottingham. If I was a horse, I’d like to gallop here.

We park in the car park, where cars are already having to be pushed out of the mud. This is not a good sign. I don’t like cross country and I particularly don’t like muddy cross country as funnily enough most of them tend to be. Oh and did I mention it’s raining.

The 10k-er’s are just finishing and then its L turn, as the wimps, sorry I mean the competitors who didn’t fancy the sharp elbows and studs in the back of the calf environment of the real thing, line up for the start of the Challenge event, the one where they get an unassailable head start. I presume here that the challenge is to stay ahead of the main race but I may have misunderstood and anyway they have an unassailable advantage by starting an hour early. 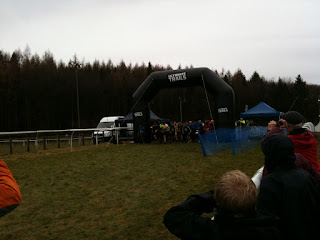 I wave her off, the dogs bark her off and then I go off to get ready myself. The rain seems to have stopped, obviously feeling that its work is done and it has already softened the ground enough. Then I head to the start, telling the dogs that L will be back soon, as she has an unassailable head start on me, and that they will be able to bark me across the finish. 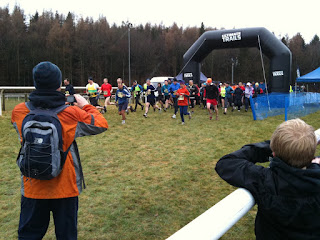 The official on the start informs us all that the first 4k is fairly easy running before it gets narrow and muddy. He says this is a Cumbrian accent so his idea of ‘easy running’ could mean literally anything but during that one sentence my race strategy is formed. Leg it to the front at the start, stay there for 4k, then try and hang on for the remaining 14k. No problem. The best strategies are the simple ones.

So off we go and to be honest the official is right, the first section is not too bad, mainly uphill but mostly solid underfoot. It’s rocky but it’s not slippery, so, so far so good. Quite fun this in fact, as I gain place after place, uphill is my thing.

Then it starts to get muddy. Correction. Bloody muddy and steeper. As I start going rapidly backwards through the field it dawns on me that I’ve entered a fell race. How stupid of me. How did that happen? Did it really seem like a good idea at the time? Someone describes the effect of running in so much mud as like Bambi on ice. Did Bambi fall flat on his face, lose his left shoe, twist his left wrist and simultaneous put a thorn bush through his right hand. I think not.

Some kind (ish) passing competitor asks if I’m ok as I hop downhill to get my shoe, I know he’s taking the Michael; I would have done the same. I walk a bit; it’s safer but then start running again. It’s only 18k, I am well fit enough for this, mud glorious mud or not. I could do this with my eyes closed... not that I recommend such a strategy, as I lose a shoe again, best watch where I’m putting my feet.

Then what’s this... tarmac... I resist the urge to kiss it. Oooh I love tarmac. Sadly there’s not enough of it in this race because I suppose that would upset the purists and the mud worshippers. Sadly I soon have to wave goodbye to the road, as a marshal directs me through a gate and back on to the fells, where we continue the mud-fest. I'm assured that there are nice views to be had but every time I lifted my eyes to look at them I slipped or fell over a rock so I canned that idea. So if you want my opinion of the view, it was all a rather brown, muddy colour.

Oddly despite my two steps forward, one step back approach, I’m already catching a few runners from the Challenge race who have already, somehow, thrown away their unassailable lead. Admittedly some of these are walkers, they’re carrying poles to drive home the point that they are walkers rather than just plain slow, but some of the ones I pass are clearly runners.

I make it to the first of the two drink stations, situated at about half way. As well as water they also have mint cake, which is very welcome. Then it’s back to wading through another river of mud, all you needed were a few shells coming down beside you and you could have imagined you were in a World War One trench. Then my foot hits something solid amongst the sludge and my ankle goes. Then just when I think things couldn’t get any worse, I fall over again.

On the next downhill section, I pass an octogenarian rolling in the heather, he’d taken a tumble but someone grabbed him before he continued his roll all the way down to the estuary below. He seemed fine and should be grateful he landed in the heather. Land head first in some of this mud and they might never find you again.

Then after that descent we’re back, thankfully, on terra firma, my beloved tarmac. I can get back to proper running again. Then, whoah, hang on, who’s this? Oh no. It’s L. This could result in divorce, removal of beer rights or worse, no canoodling tonight. Can I sidle past and hope she doesn’t notice me, my crafty mud all over disguise might deceive her or it might not. In the end I put on my best ‘Hello Dear, fancy seeing you here’ smile.

So just when does the unassailable become assailable? When you get lost apparently. I suppress a chuckle, it wouldn’t be a good moment, and I put on my best sympathetic look. Personally I thought it was well marked, although there had been a few grumbles from other runners. I think there was some emergency out on the course, some marshals had to go assist and therefore deserted their posts. Seems she may have done anything up to an extra half an hour off the course. Oops. She gives me permission to skip on ahead, she probably doesn’t mean it but I go anyway.

It’s kind of them to send us through a ford, it got my shoes nice and clean, although terribly pointless as I was then directed to another field where green grass was just a distance memory. Someone commented that going back to running on tarmac was going to be so dull after this... listen mate, dull is underrated, believe me.

Finally I stagger down the final hill and gallop like a racehorse on to the racecourse, well not quite. It’s over at last. Suppose it wasn’t too bad. Suppose I did only lose my shoe in the mud three times.

My time of 1:41 was actually a lot quicker than I expected and I’m half way up the field which is a pleasant surprise. Then there’s the damage... one twisted ankle, one twisted wrist, several thorn splinters through my fingers, two falls and a submission (well almost). All in the name of fun. Do I not like Cross Country. All for a free sticky toffee pudding at the finish and a T shirt.

L finishes around ten minutes behind me. I smile politely but she looks gutted. It wasn’t my fault she got lost!

And L does seem to be still talking to me...
Posted by FitForNothing at 5:00 PM