Tonight I’m planning my first serious training run as part of my build up to the Nottingham Half Marathon. So I get the bus and walk the rest of the way to work, listening to my book (I’m turning into L), saving my energy for later. I shall do the run straight from work.

Daughter rings. The ‘Rave Shack’ is up and running... and presumably raving. In fact they’ve stripped the shirt off the only boy and written the name of their adopted abode across his bare chest. What with I’m not sure but I hope it’s erasable.

After work, I run from Pride Park to Long Eaton, that’s around nine miles. It’s tough, very tough. My legs ache a lot when I get home and that isn’t supposed to happen. For the first time ever I ran listening to an audiobook rather than music (I am seriously turning into L). I thought this might cause me to run slower but obviously not, if the state of my legs are to be believed.

Despite being well knackered after that, I still decide that I ought to finish cutting the hedge, now that the wasps have been culled. We’re going away on Thursday and I wasn’t sure when I’d get another chance to do it.

The wasp’s nest is very impressive. 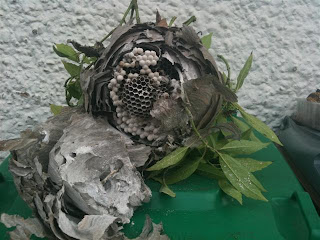 Despite all this activity, I still can’t sleep. Perhaps I’m overtired. Who knows? They do say as you get older you require less and less sleep, unless you’re L that is, but at this rate I’ll soon require none at all. Apparently it bottoms out at about four hours a night but I can undercut that.