Another Reason To Remember Leicester

Day three. We amble across to Leicester mid afternoon, restricted a little by the Sunday service on the trains. It’s sunny. The mud has baked nicely dry and its firm enough to sit on, as many folk do as Jose Gonzales's band Junip take the main stage for a spot of Spanish guitar laden electro from Sweden. 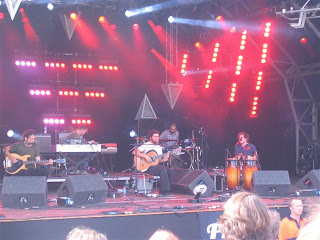 Indoors it’s instrumental band Errors, a pounding mix of synths, guitar and drums. We’ve seen a few like this recently. They are excellent but instrumental just doesn’t do it for me... they need a vocalist. Wonder if Mark E Smith is still in the building.

We’re back at the main stage just as Low Anthem go totally acoustic and shun all modern forms of amplification. This is fine at your typical spit and sawdust intimate venue but a main stage outdoors... The consequence is that most of quite a large assembled crowd have no idea what’s going on as they perform to solely the first five rows. 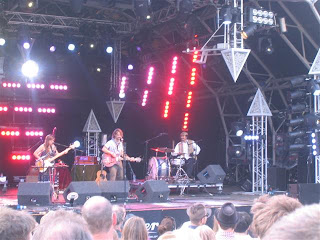 Once they plug back in, they have their moments but we want to get front row for Los Campesinos!, so we hurry back indoors, where we hear Gareth sound-checking with a few Mumford swear words, who headline the main stage later.

Sunday was on paper the best day at the festival. Drowned in Sound have sponsored today’s indoor line-up and it’s a pretty good one with LC! followed by Frightened Rabbit and then The Futureheads.

As Los Campesinos! take the stage a quick head count confirms that they are eight strong today. Thankfully there’s lots of room for them on stage this time, plenty of room for Gareth to show off his lack of dancing skills, unlike last time we saw them at the Musician. They turn in a typically perky set, perfect festival music which is perhaps why they pull the biggest indoor crowd of the day.

Their only other previous trip to Leicester, that show at the Musician, is where Gareth tells us they had their merchandise stolen. Now he has another reason to remember Leicester... During the closing ‘Sweet Dreams, Sweet Cheeks’ Gareth gestures to the crowd to clear a space for him to jump into. Then as he leaps he seems to catch a foot on the barrier and goes down head first. If only they’d been someone there to catch him... The band, such professionals, play on regardless and Kim picks up the vocals, meanwhile the crowd peel Gareth off the floor boards and the splinters out of his face. Thankfully he doesn’t seem to be in too bad a shape. 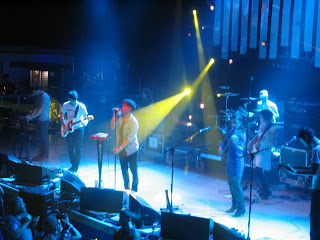 Local Natives are now on the main stage, L approves and they are livelier than I expected. The big news is though that the real ale has run out, so it falls to Frightened Rabbit to lift my rapidly sobering mood. They are another band we've only seen on tiny stages, so also must be revelling in the extra space. They also come now with added polish, a feature of playing so many gigs I suppose. 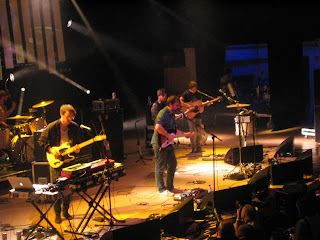 Scott tells us the rabbits were indeed frightened by a scary flight into Birmingham this morning. They play an oddly short fifty minute set, shorter than LC!

Mumford and Sons’ sound probably suits the outdoor arena. Though I’m not sure how they’ll stretch their limited output to fill a headline slot but there’s plenty of people willing to find out. We linger a while and they sound good, their album transferring to an outdoor arena much better than I thought it would. We have divided loyalties though and nip back indoors to catch the onslaught that is the Futureheads. 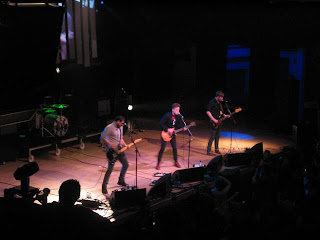 Their simple rock sound is a punchy and fitting finale to the weekend.