You Can See Why They'd Rather Be Outside

There may not be anything impressive happening on the pitch at the moment at Derby County but at least they seem capable of constructing something impressive off it. A statue of the Derby’s championship winning partnership from the early 70’s, Brian Clough and Peter Taylor, was erected yesterday. Today was my first chance to see it. 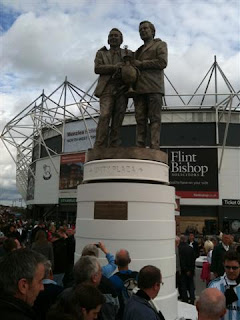 You can see why those two preferred to be placed outside the stadium rather than in. Derby were 2-0 and cruising against the early league leaders, a rather unimpressive (today at least) Queen Park Rangers, with 90 minutes on the clock. Goals for the visitors in the 92nd and 95th minutes ensured a 2-2 draw. Thoroughly depressing.

I could really do with revisiting that excellent beer from last night, Tucks Tipple. Damn, we’re in Broadway and damn, it’s still on but I'm trying to be AF tonight, race tomorrow. A coffee and a juice then please.

We’re in Broadway to see 'The Girl Who Played with Fire', which is the second instalment in the Millennium trilogy and the sequel to 'The Girl with the Dragon Tattoo', which we saw earlier this year.

One year on from the conclusion of the first story, Mikael Blomkvist is back at work at Millennium magazine when a young journalist and his researcher girlfriend approach the magazine with a meticulously researched exposé of Eastern European sex traffickers which implicates several people in high office.

Meanwhile Lisbeth Salander is drifting around the globe, eventually returning to Sweden with a bang. When the journalist and his girlfriend working on the trafficking story are killed, Salander’s prints are on the gun. Then Lisbeth's hated guardian Nils Bjurman is shot dead as well. It’s not looking good for the dragon girl. 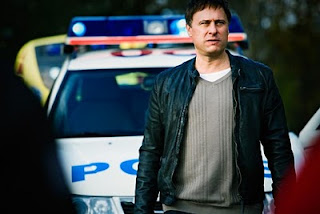 She is accused of murder and Blomkvist embarks on a quest to exonerate her but she’s not totally helpful at clearing her own name. No one can even find Salander, who hides out in her plush new apartment that no one, especially not the authorities know about.

Shadowy characters linked to Salander’s past go to her registered address but Salander has sublet the place to her friend and occasional lover the kickboxing Miriam Wu. They kidnap Wu and leave her in the hands of Ronald Niedermann, a thug with a bizarre medical condition called ‘congenital analgesia’ that means he feels no pain, oh and he’s built like a brick shithouse as well. He beats her up in the quest for information she does not have. It falls to a friend of Salander’s, a real life boxer called Paolo Roberto, played by the man himself, to rescue her in a bare knuckle fist fight with Niedermann. 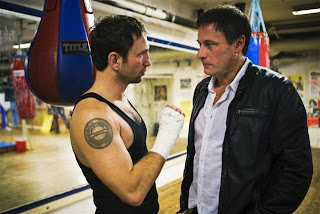 Now, stop right there and just hang on a minute or two. All this excitement happens pretty quickly in the film, whereas it took weeks of perseverance with the book for me to get this far. I feel cheated already. Lots of background and character development have already been skipped. It’s also like Salander has immediately been presumed innocent, that’s not how it was. Out go the dynamics within the police force, and most of the murder investigation. Even the sex trafficking angle is only touched upon very lightly.

Ok, so it’s always difficult when converting a book to film to decide how much to leave out and what to focus on but I think they got this one wrong. The first film was a genuine whodunit, whereas this time they’ve removed the ‘who’ because it’s clear who ‘dunit’ almost from the start. This causes the film to lack substance and become far less interesting, even the mysterious ‘Zala’ suddenly does not seem that mysterious.

There’s no sustained tension. There can’t be when the film sped along at such a frightening brisk pace. So much so that Salander‘s escape from being buried alive was treated so flippantly it was almost comedic. It’s probably my own fault that I’m un-enthralled by the story because I’ve broken my golden rule of seeing the film of a book I’ve read. 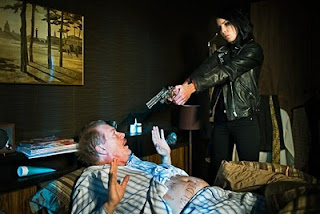 That said, it is faithful to the book, but only as far as it goes and that's a synopsis of the main events from the book. There are so many elements that are hinted at but not explored. Everything else has been jettisoned to cram what’s left into two hours. In fact the film looks like it’s been cut. Why not take another half an hour and flesh it out.

Oddly the first film choose to discard Blomkvist’s relationship with Erika Berger, whereas this second film includes it but with little explanation. A change of director clearly brought a change of approach.

On the plus side, the action is riveting and it still a good film, highly entertaining with Noomi Rapace brilliant again as Salander.

Perhaps I should just read less. 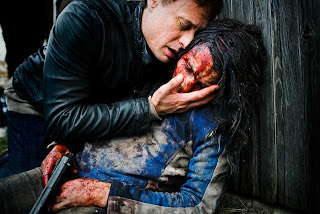