L says that some fool has entered us into a 10 mile race, as I recall it wasn't me. This morning we're at the Chesterfield Spire 10 mile race. 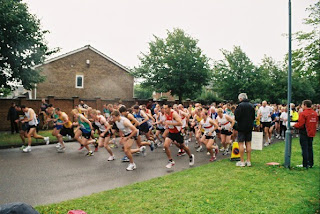 It's a very well supported event despite the exceedingly changeable weather. The course was all on road and basically a four mile climb up some fairly steep hills followed by a six mile plummet back to the finish. The first stretch was a bit of a slog to be honest, not helped by the sudden downpour that seemed to last for most of the uphill section. I was in a good position after that stretch but then quickly started to go backwards through the field. I have nil descending skills. People were skipping past me with ease on the downhill sections and I was doing sub-seven minute miles which I thought was impressive but obviously not.

73 minutes it took me in the end, which is a bit tardy when you consider that the winner, Andy Greenleaf of Winchester & District Athletics Club finished in 53:11. Show off.

The post race was good though, they had a bar at the finish line, then we had coffee in the car, then a hot bath and quality time with L at home as the kids were still festivaling, followed by a trip out for Sunday lunch. This included the second excellent beer of the weekend, Brunswick Brewery’s Father Mikes 5.8%er. Very nice. I drink in its ‘home’, The Brunswick and have always avoided this due to its strength. Not sure I can continue to be a stranger.

Then what’s the thing to do on a night at the fag end of August when the weather is already turning Autumnal and if you take this morning into consideration, downright ugly. Go to the open air theatre of course. Well it seemed a good idea at the time we booked tickets.

It’s Shakespeare of a sort; a play called ‘Love In Shakespeare’. I say ‘of sort’ because the setting for the play was an amateur talent night at The Shakespeare Arms pub. A chap called Chris tells us his own love story with the help of a touch of magic and a selection of Shakespeare’s most romantic bits which are woven into the acts on talent night. Its decent Sunday night entertainment and the Shakespearean bits are very good but often come as blessed relief from some dodgy pub jokes, marital bickering and a chap failing to contain a dodgy Chinese meal. 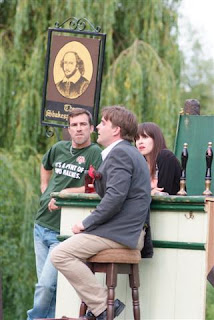 The cast are excellent, particularly when in Shakespeare mode for which you really needed the programme to keep on top of. An old couple’s act morphs into the balcony scene from Romeo and Juliet. A stand up act converts to Helena’s pursuit of Demetrius from the Midsummer Night’s Dream. Whilst a performance of Marvin Gaye’s ‘You heard it through the grapevine’ in mime, yes you heard right, in mime, was turned into a scene from Othello. Then there's the Salvation Army doing a segment from The Winter’s Tale and Henry V’s courting of Princess Katherine of France but I can't remember how we got to that. 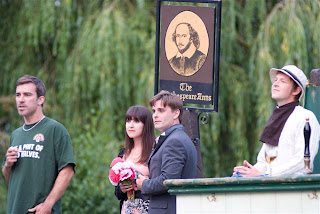 There are even songs from Dr Hook and the Beatles, ‘All You Need Is Love’ naturally. Then just when you’re expecting Chris to run off with the apparently more than willing landlady Kerry, something completely different happens. Well I suppose Shakespeare would have approved of that. 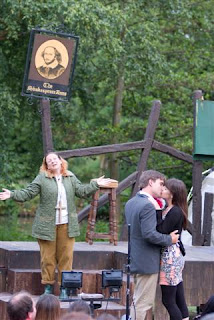 It’s a fun and enjoyable evening but all a bit bizarre. Unfortunately the standard of writing of the new material doesn't quite live up to the old stuff, obviously, but I commend the writer on a brave idea, that perhaps didn't quite come off. Instead it perhaps just shows up how crap and unromantic we all are these days and perhaps that was the point.

(All images by Nicholas Ripley)