It’s Not My Week

Serious stuff today, as we get a safety briefing before the start of the Welbourn Castle 10k Trail Run. It concerns muddy fields, slippery bridges and rabbit holes. As I said serious stuff, for my ankles.

This race got absolutely murdered on the Runners World forums last year for its unfriendliness to runners but the organisers appear to have listened. It’s a new ‘improved course’ using farmer’s roads, footpaths and bridleways. There even seems to be plenty of tarmac in it for people like me who prefer the terra firma to the terra very muddy. Walkers have been told, politely I assume, to start at the back and to not get in the way of the runners and the whole thing kicks off from the brand new Welbourn Village Hall with all facilities on site. So I can’t whinge really.

It is a bit warm though... and it’s certainly hard going on the legs, particularly on those narrow tracks that really flexed my ankles. Still, this is just a training run. I don’t want to do ‘fast’ as this is part of my Nottingham Half Marathon training where I won’t be running at my usual 10k pace. So I took it fairly steady and I even stopped at the first drinks station. I also have half an eye on my planned run home from work tomorrow, 12 miles hopefully. I need to save some energy for that.

Overall, the race was pleasant enough. I almost enjoyed it. Well apart from that ploughed field near the end, that wasn’t the best. My time of 46 minutes wasn’t too bad either in the circumstances and I also came in just ahead of the first lady, which is always nice. I so seem to be allergic to this race though, as my legs were nicely red afterwards. I seem to have picked up a nasty rash from somewhere, clearly something in the undergrowth disagreed with me.

Then the best bit. All the runners got a free pint afterwards at the local pub, The Joiners Arms, so that was good, and also a Toonie Express Mug. Toonie Express being the organisers and very well organised it was as well. Doubt they’ll be any complaints this year. 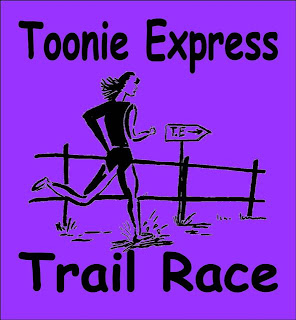 Then we go bed shopping. We’re finally replacing the one Son trashed at one of his parties. As he starts Uni in October and parties are banned anyway, this one hopefully will be with us a bit longer than the last one was. We buy a new mattress with it but then faced with a hefty delivery fee comes the problem of getting it home. Until the salesman introduces us to vacuum packed mattresses which means you can get it in the car but then when you open the packaging it explodes into life and becomes a normal mattress. Cool.

After that the day is just like old times, the perfect race day, out for Sunday lunch after a post race bath and warm down. Then having survived the morning’s race I fall off a chair at home and injure my wrist. Not completely my fault, it was a chair that I had repaired after it also, like the bed, fell victim to one of Son’s parties. This tells me two things. One, I’m not very good at repairing chairs and two, it’s not my week.