Pedal power today. I nearly run into, not literally, L and the boys. This would have meant doing the old meet and greet routine, so I try and slink past the end of the street without them noticing.

L reports back from the walk that there's a sign in the post office saying that the Wollaton Park Estate is now a conservation area, and they are asking people to report any alterations to the bungalows that don't have planning permission. This is news to me.

A quick check on the internet reveals that a few days ago the Development Control Committee of the Nottingham City Council designated a new conservation area around the Sutton Passeys area (that’s us, Sutton Passeys is a local street but also the name of a long lost village believed to have existed many moons ago nearby) of the city. The designation takes immediate effect and there’s a huge 47 page document about it, telling you what now needs planning permission. Basically this now means you now need planning permission to change just about anything and they will need to be in keeping with the historical character of the area.

The reasoning. ‘As soon as a bungalow is vacated, a developer moves in and vandalises the original design with the aim of letting it out to as many students as he can get away with.’

The area is unique because of the design of the bungalows (the "Crane Houses"), which have steel frames and concrete wall panels. A Meccano kit basically, designed for rapid construction to meet the demand for new housing in the 1920's.

In a way this is all great news but it is also a case of closing the stable door after the horse has bolted. Many of the houses retain their original shape and form but a lot have been altered, some bear little relation to their original form and that’s a shame. We’ve altered ours, new windows, new doors, new roof, loft conversion, all without planning permission because we didn’t need it. Not then. That said if we’d had to work within the restrictions of the new guidelines, I’m sure we could have done it. So it’s a shame these rules were not in place many years ago.

It’s a cold and wet cycle home. So much so that I don’t fancy venturing out into again with the dogs, so they’ll just have to make do with exercise in the garden. I’m in a rush anyway. Gig tonight.

Frank Turner is everywhere, he seems to be always performing somewhere, always touring. So much so that the options to see him were quite diverse for his upcoming December tour, from the large new Leicester Academy to the, by comparison, tiny Sheffield Plug. Then he announced a couple of warm-up gigs for his Reading and Leeds Festival appearances. Derby's excellent The Venue being one of them. Sold.

First though a Turner wannabe and perhaps apprentice, Ben Marwood. Who appears to have taken a couple of days off work and travelled for five hours up from Reading to be here tonight. After tomorrow’s appearance with Frank in Kendal he intends to be back at his boring desk job on Friday morning. That’s some schedule.

We are glad though that he took the trouble. He describes himself as ‘either a rubbish version of James Blunt or some kind of deity, depending on who you listen to’. Tonight Derby thinks it’s the latter and he seems quite taken aback by the reception he gets and deserves. It is the quality of the real life tales in his lyrics that make his songs so strong, the music accompaniment coming only from his acoustic guitar.

There are so many great lines of his that I could quote but ‘I will still be this cynical when I get paid and I’ll be this way until I get laid’, somehow stands out, from a track called ‘Oh My Days’. He does though, seem to have an obsession with ‘Get Cape, Wear Cape’ and whether they actually stole his sound or not... There may be a story to tell here but it’s not one he divulges tonight. It’s mentioned on his MySpace and in his second song tonight ‘Question Marks’. 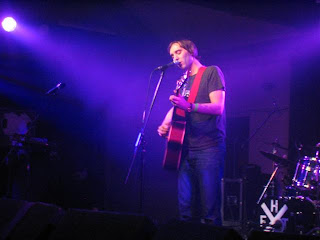 His ‘moment’ though is probably his penultimate song ‘Singalong’ which is sheer genius. He endeavours to get the crowd to sing with him and of course succeeds with the great singalong chorus ‘Tried to write a singalong but we all forgot the words’. Marwood seems to be a bit of a star in the making, one to watch out for I think.

Talking of a deity, here’s Frank, with his punk folk songs straight from the heart. Opening with ‘Eulogy’, a great little new song and I mean little; it’s very short before ‘Poetry Of The Deed’ kicks off what proves to be an exceedingly hot and sweaty gig. It’s serious hot being amongst the crowd but it must be worse on stage and the band are soon dripping with sweat as they pack a lot of songs in early before Franks reverts to storytelling later, as he slows the pace. 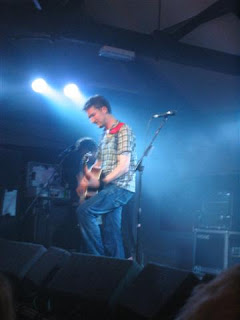 His following seems to be ever increasing but one thing you don’t seem to get many of is the casual fan. The sold out crowd tonight are buzzing and just as fervent as every other Frank crowd I’ve seen. They know every word and can keep up, even in the fast bits such as on ‘Reasons Not To Be An Idiot’ which comes early. I can’t.

He explains the story behind ‘To Take You Home’ about a French girl who wasn’t that into him but he wrote the song about her anyway. He went all the way to Paris on the Eurostar to play it to her but before he could even tell her about it, she dumped him. So he says he swore never to play it... well we can’t keep all our promises can we.

For ‘Dan’s Song’ he needs a harmonica player and a girl in the audience has her hand up before he even asks, so she gets the gig. A plant? I don’t think so, just an avid fan who clearly knows the form and she clearly been practising, she’s very good.

Then a new song and a chance to ‘f**k off to the bar’ as Frank puts it. It’s not so new that it hasn’t been on YouTube though, a lot of the audience know it and are more than willing to join in when asked. A bit subdued at first but once Frank points out at how loud the Germans were last week, the volume is upped. As he says a touch of xenophobia works wonders. 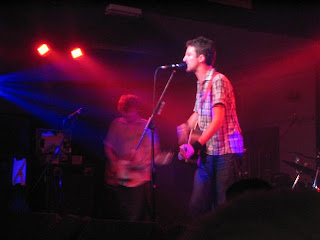 Then the very sad ‘Long Live The Queen’. A song in memory of a good friend of his who died from breast cancer. It is such a powerful song, so well written and heart breakingly sad. Her death was a tragedy but yet the message is to celebrate her life, as she lived it to the full and that's what everyone should do.

As usual as the show draws to its close, Frank thanks everyone, his band of course but also all his crew as well. Then Ben Marwood joins him on stage for the closing ‘Photosynthesis’. A good job too, someone has to play acoustic guitar on it as Frank has shredded yet another guitar string. 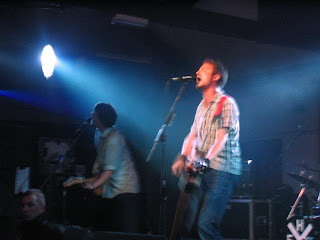 Frank comes back solo for one more song but not before he’s requested that a shot of Jamesons be brought up from the bar. That’s not a shot; it looks like at least a double. Whiskey in one hand, lager in the other, he embarks on another of his long stories before he invites everyone to settle down with him around the ‘kitchen table’ without a mic for a communal rendition of ‘The Ballad Of Me And My Friends’.

This is supposed to be a festival warm-up, ‘f**k the festival’, he proclaims, ‘the shows here’ where we ‘have all the best stories to tell...’. Too right.
Posted by FitForNothing at 4:00 PM