At 4am this morning the kids depart for the Leeds Festival and L displays getting up skills that I didn’t know she had, twice.

We'd both love to be a fly on the wall this weekend, just to see how they get on, rather than for the bands. There are not many that bands we would want to see, well not ones that we haven’t already seen indoors, apart from the Libertines reunion. Would like to have seen that.

I can’t decide how to train today because I have squash tonight. Should I rest, cycle or run? In the end I run, a not so brisk four miles but I still needed a pub lunch to get over it. At least I didn't pick up any new injuries and I didn’t pull anything. Well unless you count that girl who woke me at 4am this morning.

After all the dilemma about what to do this morning, squash is cancelled. Apparently my opponent has a bad wrist. At least it wasn’t the dreaded washing up that did for him this time, it was even less rock ‘n' roll than that. He cites 'over and incorrect use of the mouse'. The mind boggles. I ought to make him play left handed.

Well, I suppose I should take the opportunity to do the gym instead. I need one last monthly session to qualify for my £50 council bribe. As it’s the 26th August already, I best get in with it.

Apparently it's not raining in Bramham Park, yet and there are some nice photos on the BBC website of early arrivals at the festival. L says she quite likes the fishnets and wellies look. Isn’t that the sort of thing I’m supposed to say? Though, can’t say wellies do it for me. Quite like the fishnets though...

L says she daren't be the anxious parent, bombarding them both with texts. So I text Daughter myself, in an unconcerned sort of way.

All this takes me back to the only time I camped on site at a festival, at Reading in, errr ummm, 1987. 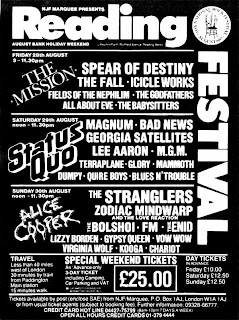 Check out that dodgy line-up. Reading in the 80’s never could quite decide just who their target audience was and bands being bottled off was a common occurrence but that was all part of the experience back then. Though Zodiac Mindwarp and his band started throwing them back, not sure they’d get away with that these days. Bad News you may recall were a spoof metal band consisting of three of the Young Ones cast and were joined at Reading by Brian May of Queen.

We went primarily for the Gothness of Friday, though Spear Of Destiny didn’t turn up. Kirk Brandon whinging about a broken leg or something. The rest of the weekend was more heavy rock orientated. In fact we only paid for Friday but got to camp and got into the arena on Saturday unchecked and all for a tenner. Life was so easy then. We came home before Sunday though.

It seems like only yesterday.... My mate and I pitched our tent between two tents belonging to two pairs of attractive young girls. Good strategy we reckoned. Then we were treated to the sounds of them repeatedly putting themselves about, as they worked their way around the campsite, ignoring us.

We had to reconstruct the tent several times each night as someone always fell over it as they drunkenly tried to find their own canvas abode or the ones of our popular neighbours. We fared better than another chap who had one of his poles nicked, just the one you understand, which presumably was funnier than nicking all of them.

You learn such life lessons at these places, such as never to accept a plastic bottle of drink off anyone you don't know, not with toilet queues the lengths they were. Happy days.