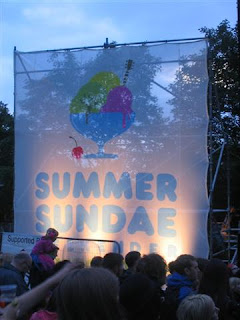 We’re doing the whole music festival thing on the cheap this year. Well, on a smaller scale at least, travelling only to Leicester and the Summer Sundae Weekender in the grounds of De Montfort Hall. A festival that is now in its tenth year and if, like us, you’re used to huge festivals like Leeds this one is much cosier. You can walk around the entire site and all five stages in around ten minutes. They even sell proper beer. We’re so hip we’re even here for the whole weekend and we have the wristbands to prove it. 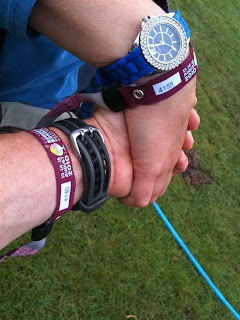 This is a festival like no other... perhaps... it has a garden 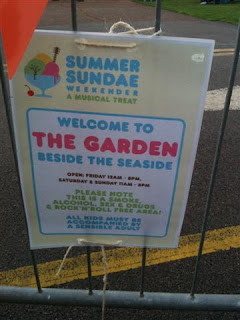 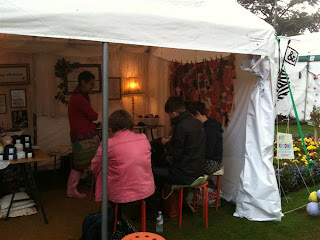 And of course the sundaes 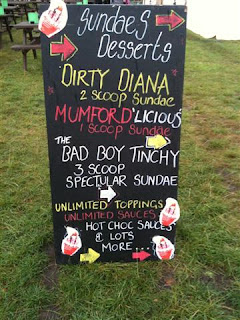 And a few bands.

Kyt, a local band and the winner of the BBC East Midlands competition get the honour of opening the main stage. Their music is unfamiliar to us of course, apart from ‘Solsbury Hill’, yes that one. It’s an interesting version. They weren’t bad, drawing a reasonable crowd but the elements intervened and the first of several bouts of rain drove us and many others indoors.

One advantage of Summer Sundae is that De Montfort Hall itself is on hand as a safe haven from such weather but I certainly don’t envy whoever has to wash all the mud out of the carpets come Monday. Nottingham’s Spotlight Kid are the first band to grace the indoor stage. Three guitars, bass and a girl vocalist, more 90’s shoegazing retro but they prove to be the best of the local bands we see across the weekend. 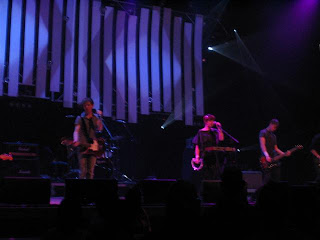 Leicester’s Musician venue have their own tent and we stumbled across Kirsty Almeida in there. Her jazz n blues n stuff seemed very popular with the sat down chilled out crowd, although this might be because of the rain. The Musician presumably had a hand in the nearby real ale tent as well, which is a very welcome sight compared with the usual beer desert that festivals are.

We venture back outside where Charlie And The Martyrs are dabbling with another odd mix of styles on the main stage but it soon starts raining again, so we switch our attention to another Nottingham band Swimming on the indoor stage. They are another band who can’t decide whether they want an 80’s guitar sound or an 80’s keyboard sound and consequently mix in too much of both. 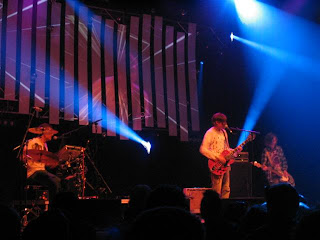 The Phoenix eFestivals tent is mainly for comedy and showing films but when we pop in there for a change of scenery there are some weird choir rehearsals going on. Apparently for a performance later on during the weekend.

There are a few no shows today, artist wise, and quite a few artistes switching stages. We get caught out when we wander back to the main stage to see Fanfarlo but apparently they are stuck on the motorway, allegedly and we get the Mercury nominated Irish singer-songwriter Fionn Regan instead. The sun comes out for him but he does little for me.

Following him though, come the Sunshine Underground to brighten up my day, delivering a typically excellent forty-five minute set and it even stays dry for them.

After which L suggests we take in a couple of Lou Rhodes songs but we leave after only one. She’s so pleasant it's painful. Off for a pint instead. Which I sup listening to comedian Adrian Poynton in the eFestivals tent. He turns from your average unfunny comedian to suddenly quite amusing once he started ad-libbing and picking on his audience. This improved his act no end but did nothing for audience retention as people started to leave out of fear of being his next victim. We move on... to see Teenage Fanclub who haven't changed much since I saw them at Trent Poly decades ago. 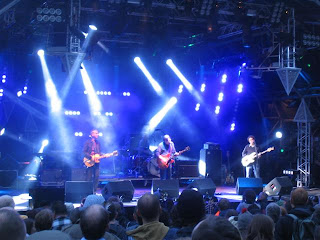 They jangled along merrily and inoffensively then and did so today as well, there were even a few tunes I vaguely remembered.

The find of the day are Sheffield’s Charles Watson and Rebecca Taylor, collectively known as Slow Club, who are excellent until she stops singing and starts talking. Crikes that accent. Stick to what you’re best at Rebecca, singing. L is so impressed she goes home and orders the album. 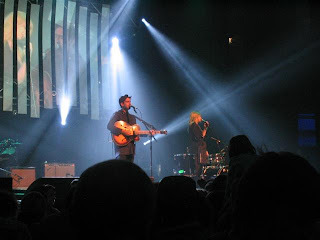 All that is left is a choice between headliners Roots Manuva (indoors) or Seasick Steve (outside). We choose Seasick Steve and walk out after two songs. How rock n roll of us. Can’t see the appeal to be honest, yes he was unique and impressive with his guitar playing when he broke through on Later with Jools a few years ago but now... just another blues act or perhaps I just don’t get it, as he seems popular tonight. His guitar playing being whisked away on the gathering wind as we head off for our train home. Nope, we’re not camping.