Meet Me By The Knitting Tent

I send L off ahead to the festival as I take in the football. Derby v Cardiff. After the opening day win at Leeds expectation was brought back to earth with the traditional annual defeat to a lower division club in the League Cup. Derby are a consistently inconsistent as ever and lose 2-1. Seems this will be another season like the last one.

L's mission at the festival, should she choose to accept it, is among other things, to report back on X-Factor ‘star’ Diana Vickers... Audience dividing might be a polite way of putting it. She doesn’t watch for long, nor does she linger long in the company of Paul Simon’s offspring Harper either. Though she does brave the front row and the rain for Turin Brakes, who I’m reliably informed were excellent ‘Summer rain, dripping down your face again’, how apt... whatever that song’s about.

I arrive soon after and we rendezvous outside the knitting tent, where else, where I’m told we’re heading inside for a spot of tongue... I mishear, she says Tunng. Which turns out to not be a Norwegian fish dish being sold by one of the many eclectic food sellers but a UK band specialising in something they call folktronica. The hall is packed and it's not even raining, at the moment. Brilliantly quirky. 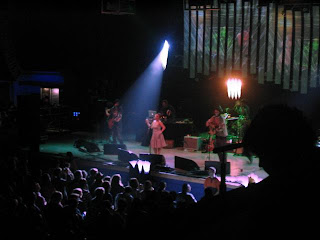 Then we wade through the mud to the main stage for the hotly tipped Stornoway. Who are more folksy than I expected and pleasant but also rather empty sounding.

Back indoors, Canada’s Caribou take an age to set up but I guess it’s their own stage time they’re wasting. ‘Inventive funk grooves’ my programme says from a chap called Dan Snaith who’s been around in many guises for a decade or more. Seems he can’t make his mind up about his sound and still hasn’t.

That said all the bands indoors are sounding better than those outside in the wind and the rain. Funny that, acoustics are a wonderful thing. Why would any band plump for the outdoor stage?

Then to the continually full Musician Tent from which a pair of female lungs in full flow can be heard. I like a bit of girl rock, so we battle our way inside for the first time and to the front, where we discover Tiffany Page on the far too low stage. 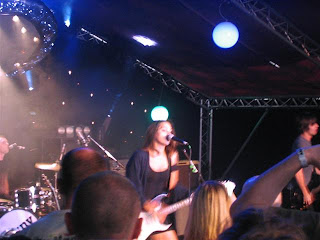 Visibility is still close to nil even near the front but at least you can feel the sweat and the spit off her and her band. I approve but I get tugged away from this rock chick and instead we head to the Rising Stage and a US band called Fool’s Gold who specialise in African rhythms. They deliver a lively and colourful show that appeals to L but they’re not Tiffany... 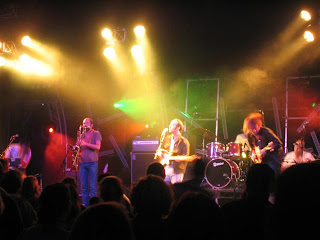 Nor, back on the main stage, are Brighton’s The Go! Team, who rather appropriately go on a bit, so we head back early to the Musician tent to see who's next to grace the soggy stage left behind by Tiffany Page. We bagsy a good spot in time to see Sunderland’s Frankie And The Heartstrings, who are a kind of 80’s style rock 'n' roll act. We almost make the front row but then get pushed back. It seems you are guaranteed front row only if you have a big camera and maybe a press pass. Note to the Musician, next year can we please have a bigger tent, a higher stage and a press area like they have on the other stages.

Indoors it’s packed for The Fall. I think this is the fourth time I’ve seen The Fall, each one being approximately ten years apart. Perhaps this is the correct spacing for Fall gigs. You either like what Mark E Smith does or you don't. Though sometimes the band are only as good as the musicians Smith assembles around him. Tonight his band are awesome. All they need is a more conventional vocalist... only kidding, that would be missing the point entirely. Despite the blinding musical backdrop the focal point remains Mark E himself, who ambles around the stage bellowing out the lyrics to go with the terrific sounds being produced by his band. It’s a good blend. 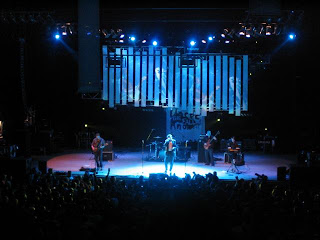 The crowd, a mix of the devoted, the confused, the appalled or the simply enthralled (that’s us) lap it up or pop outside to wait for Tinchy Stryder. The tracks, I understand, not being a Fall aficionado, are drawn mainly from their latest album ‘Your Future Our Clutter’, which must be some record. Smith wanders around the stage, twiddling with things, and at one point turfs his wife, Elena Poulou, off her keyboard and then goes on to show why she’s playing it and he isn’t. Then in the end he simply decides the band have done enough for one night, puts his jacket back on and exits stage left. Top that Tinchy...

Which I suppose he may have done... but I doubt it. Though we’re again too rock n roll to stay and find out, as we head off for our train.