I volunteer to walk the boys this morning. The boys who are now affectionately known as Bodger & Badger, which I don’t quite understand as I never really watched it when it was on and anyway Simon Bodger was a human. L says Doggo thinks he is. 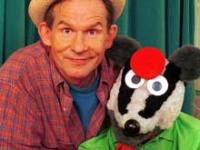 On his walk, MD is a saint but then again, we didn’t see any dogs, cats, squirrels or deer. So that might have had something to do with it.

Driving off Pride Park the radio mentions a traffic jam in Beijing that has slowed vehicles to a crawl for nine days in a queue for about 100km. I suppose it’s not quite that bad here.

Mind you I bet they don’t have to contend with men dressed as pizza boxes staggering across the road in the wind... I kid you not. I won’t mention the company other than to say that if they’d toppled each other over it would have been very appropriate.

Another day dodging the showers, this time whilst dog training and then back home for a demonstration of L's squat thrusts. She’s been re-assessed at her gym, they said her last programme was too basic. Now they’ve got her doing squat thrusts among other things, though it’s known as 'Mountain Climbing' and she needs to build up to 200. Blimey. Plus she’s pulled a quad muscle. Not good news. We have a half marathon coming up you know. 19 days.