On the bike, despite the weather being totally miserable and I have a problem with a couple of vans. Firstly white van man tries to park his vehicle at the curb, the one I’m trying to cycle along. I see him coming towards me, head on, coming at me from the other side of the road. I get ready to attempt a particularly difficult bunny hop up the particularly high kerb when suddenly he sees me and offers me about 200mm of gap, which is just enough to allow me to escape from being flattened.

If white van doesn’t get you, red van man might. He tried to undertake me at the roundabout, which is fine because there’s a whole lane available for doing this. That is if only he would get in it rather than straddling the white line. How much space does he need? I move over to give him the whole road and hold up the local bus but at least red van man is happy.

I don't think I've ever seen the back wall of the Rescue Rooms stage before. It’s not a big stage and it’s usually piled high with equipment. For all I know there might not have even been a wall there at all. Tonight though I can confirm that yes, there is a wall. I can see almost every square inch of it and that’s before the kit of the support act has been removed. Something rather obvious is missing. Ah yes. A drum kit. For either act. So no drummer induced deafness tonight then. The bereftness of the stage points to tonight’s show being a minimalist type of offering.

It’s 8.30 and Acoustika wanders on to the stage. One man, an acoustic guitar and a box of electronic tricks. Just like you get outside the train station, next to the Big Issue seller. Only better.

He must be a mate of Julian's, I can see the resemblance. Except unlike J he's a man of few words. Well one actually. 'Cheers' is all he says for five songs in a row but then what's this, a couple of 'thank you very much's. Then a full blown speech, as he confesses he must be mad for attempting it as he closes his set with ‘Fear Loves This Place’, that’s a Julian Cope song by the way. It’s Acoustika’s best moment, a very good rendition of a Cope classic. Step aside JC but then again, can we live without the banter? 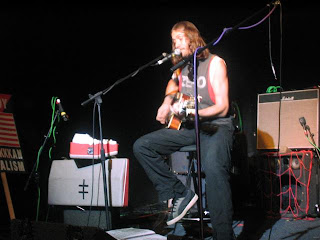 So to the man himself, Julian H Cope, all the way from Wessex to entertain a curiously busy Rescue Rooms. I haven’t actually seen the great man live since 1998, which is a bit remiss of me. So what has changed? Not much really. Except perhaps his eyesight. He has the largest set list I’ve ever seen and I don't mean as regards the number of songs on it. It's the size of the paper, it must be a metre deep at least and it’s printed in very large type. Well I suppose he is 52 now.

He opens with a couple of newer songs ‘Come The Revolution’ from his latest Black Sheep project, and a delightful little gem, entitled ‘I'm Living In The Room They Found Saddam In’. Which sounds very witty on first listen, unfortunately I haven’t a clue how you get hold of it. I can’t find any CD on his website that it’s contained on.

After arguing with record labels almost his entire career, Cope opted out of the mainstream approach of releasing proper records around 1996, instead promoting his music via his Head Heritage website. Oh and he’s not just a musician these days. He’s also an antiquary, an occasional poet and also an author. His latest book he tells us is entitled ‘Lives Of The Prophets: A New Perspective’, that’s from the view of an atheist. His banter and his forthright opinions are very much an integral part of his live shows. If you don’t get how the man thinks then you won’t get the music either, plus there’s the added bonus that Julian is funnier than your average comedian. 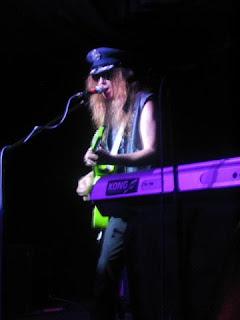 He’s also a well researched chap and he goes back to 1984’s ‘Fried’ album to tell us the story of ‘The Bloody Assizes’. The Winchester trials of 1685 where over a thousand rebels were sentenced to death, many were hung, drawn and quartered, for attempting to overthrow King James II.

Then he rambles on about people he admires. Britney, Mr R Williams.... he’s joking we assume. His real hero is Leila, a Palestinian terrorist but only because he thought she was beautiful. How very superficial of him. Cue the Teardrop Explodes' love song to a highjacker, ‘Like Leila Khaled Said’.

Amidst the rambling we get the quiet protest song ‘I'm Your Daddy’ and several cuts from 1991's ‘Peggy Suicide’, regarded by many as his best work but surprisingly there’s nothing from its follow up, the venomously anti-Christian, ‘Jehovahkill’. A record that caused a major record label, Island, to get shut of him. 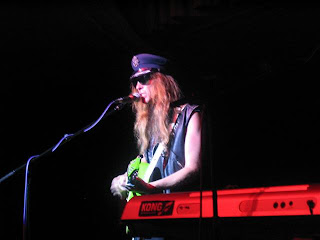 He’s skipping songs on the set list now as he’s already behind schedule, now there's a surprise. He says he only has the set list as he doesn’t want to overrun the curfew. Well, it’s not working. ‘Land of Fear’ works though, not heard that one live before. Brilliant.

He moves to keyboards for a couple more old oldies, ‘Head Hang Low’ and ‘You Disappear From View’ before back to the guitar for another stand out moment, ‘Autogeddon Blues’.

There are impressive rain effects for ‘Search Party’ unless that is, it’s real, and it’s started bucketing it down again outside.

He’s back on the keyboard for ‘O King Of Chaos’, a song about a séance that went wrong and for ‘Screaming Secrets’ off ‘St. Julian’ which apparently was a song rejected by the Teardrop Explodes. I didn’t know that.

‘Las Vegas Basement’ is blindingly good but he’s now getting further and further behind schedule. The 11pm curfew is fast approaching. So play then someone cries out, stop bloody talking! That’s simply not his style.

‘The Greatness & Perfection Of Love’ is the closest we get to a hit, obviously no ‘World Shut Your Mouth’, ‘Trampoline’, ‘Charlotte Anne’ or anything like that.

He pre-warns us that there will be an encore but to make sure that we demand one anyway, just to make an old man, who doesn't get out much, happy, before he plays a rousing ‘Pristeen’. There’s a shambolic sing-along from the crowd to ‘Sunspots’, the fifth track to be taken from 'Fried' tonight, the album that caused him to get dropped by another label, Polygram this time, but thankfully JC rescues the song before departing.

Then, what a surprise, an encore.

Even less of a surprise is that it’s ‘Sleeping Gas’, which sees him joined by his entourage, beating drums, waving flags and oddly holding paintings. Acoustika, who also seems to be his roadie, is among them. 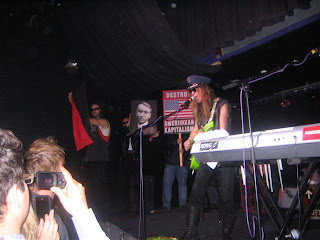 It’s a good gig but the sad fact is that Cope and just a guitar will never make a great one. He’d need a band for that and he doesn’t show any signs of wanting to take a band out on the road to perform his songs. As ever it’s the banter that makes it all worth the while. This is Julian H Cope, musician, antiquary, occasional poet, author and all round entertainer.
Posted by FitForNothing at 4:00 PM