I walk the boys this morning, who were both a bit disappointed we didn’t do the park, even though it was open. I just couldn’t be bothered to be honest. MD wouldn’t have been happy unless I was hurling a ball or a stick around. So we pound the streets and the grass verges instead. Doggo is happy anyway as there’s plenty of sniffing material.

With me being on duty this enables L to go for a training swim. ‘We’ have the Windermere Triathlon coming up. She does 1.5k! Call that a training swim? 1.5k is full race distance and that’s in her first swim for ages.

Now she says she can eat a horse. Not advisable for one in training, unless it’s a small Shetland pony of course.

I have the day off because I’m off down to London today. Last Wednesday a friend emailed me to say he’d got tickets for the launch party for Feeder’s new ‘Renegades’ album. 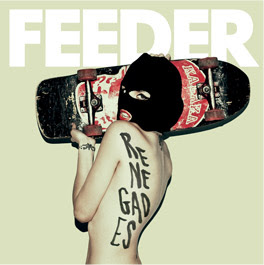 Woah. Good call. I had considering going for tickets for this myself. You just pre-order the album and then cross your fingers... but I thought if I won, I’d be going on my own but then he gets in touch.... so in short, I snapped his hand off.

The first problem was getting down there. We booked the train but a ‘super off-peak return’ was a cool £54.30 each. I can’t see what’s super about that and it forbids us from coming back before 7.30, unless I remortgage the house to pay the increased ticket price. So it looks like a full day in London then.

We meet up at Derby railway station, which is full of mud and unwashed bodies. Downloaders. As in refugees from the Download Festival who are getting their muddy selves back from whence they came and presumably all waiting for the first off peak trains like us. Consequently all trains to London are packed.

Still we make it to the Camden Barfly in good time for when doors open at 1.30pm, for this is an afternoon show. Rather worryingly as we queue we can hear the band bashing out a couple of their new songs. Have they started without us? Thankfully not, as we grab a free Aisha beer and join the queue for the upstairs room where the gigs are held, we realise they were only sound checking.

Taka, the band’s bass player, is of course Japanese, which perhaps explains the Japanese beer and why they’re screening the Cameroon v Japan World Cup match at 3pm. I assume he has an interest in it but perhaps not that big an interest as the band don’t hit the stage until 2.45, obliterating most of the first half's viewing.

They play an eight song set consisting exclusively of tracks from the new album, songs they’d premièred on their Renegades tours. Including, to close, the new single ‘Call Out’ and still, thankfully, they’re doing it all as a three piece. The crowd are understandably really up for it and the band seems to enjoying themselves too. The new material sounds better and better each time I hear them play it, although even the lighter moments of the new tracks, such as on ‘Down To The River’ are now starting to sound on the heavy side. We were hoping for an encore of oldies to follow the set but instead what we got was the promise of another complete set later on. Cool. 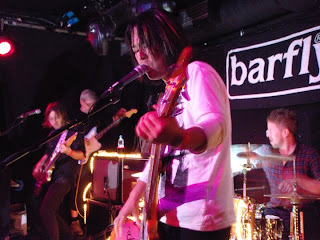 So we head back into the bar area, where the match is being shown. Cameroon v Japan wasn’t really on my must see list but I keep a vague eye on it as we try out the free Sake. Very nice it is and far too easy to have too many of. We also have a few more beers, just to water down the Sake and pass the time, as ever bands like to keep folks waiting. Although all three band members were milling around meeting their fans. Grant seemed to have positioned himself outside the toilets so everyone shook his hand en-route. I just hope everyone washed their hands before shaking his.

Later turns out to be quite a bit later, not when the match is over but a full hour after that. In fact the band doesn’t come back on until around ten past six but I’m sure it’s going to be worth the wait. This set could be interesting.

They open with ‘Godzilla’ off ‘Comfort In Sound’, not a great fave of mine and to be honest it sounded a bit messy tonight but it set the groove for the songs that followed. The ‘Renegades’ set may have been heavy but this set if anything was even heavier. Included were the two missing Renegades numbers that we usually get live, ‘End Of The Road’ and ‘Left Foot Right’ but it was when they went back to album number two for an awesome ‘Insomnia’ that the place really got rocking. ‘Insomnia’ has not sounded this good or this raw for years. Probably not since the band were last a three piece and playing in venues of a similar the size to the Barfly. It cannoned off the roof and the walls, sounding simply fantastic. 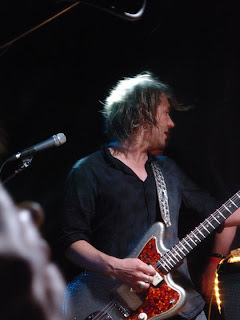 Top that? Well, it was perhaps equalled by ‘Lost And Found’, which stripped down and played raw like this, took on a new lease of life and, please takes note, sounds much better without the Foo Fighters in the middle of it.

Before which we got a slightly unnecessary reprise of ‘Renegades’ because someone requested it. They’re just being too accommodating, when there’s so much else that could be played. Yet second time around it is kind of special as the crowd start off singing it before the band have even started to play it.

Then there’s ‘Sweet 16’, still so amazing and aren’t they getting better and better at playing it again now it’s had a few outings after years of neglect. This has got to stay in the set for the October tour. Surely? 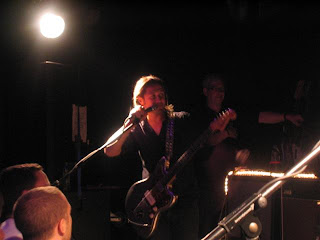 Grant has a huge grin on his face and appears to be saying to Karl, ‘What we going to do now? Are we going to finish on Breed?’ Well, that’s what it says on the set list but seven songs have been got through in such a fast time, surely there’s time for more. Karl seems to agree, hits the drums and ‘Come Back Around’ emerges. Yes, another track that sounds just amazing stripped down to its basics. 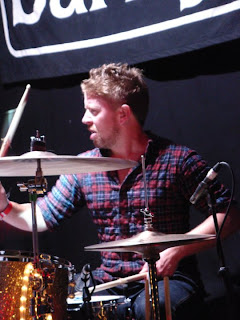 Then they do close with a cover of Nirvana’s ‘Breed’. Good though it was, it begs the question... ‘Descend’? ‘Shade’? But still it’s not a bad way to finish and it’s been a wonderful second set, not that the first one wasn’t good because it certainly was.

Then rather surreally we head out into daylight! We need food, so we have to get an even later train back. I roll back in home at 11.30 but it’s been one hell of a day. I find everyone in bed. Even the dogs, who are not waiting for me by the front door like proper dogs would be.
Posted by FitForNothing at 4:00 PM