The Chase Is On

Today L and I take part in the 29th running of the Great Nottinghamshire Bike Ride along with around 4,000 others. Though these are Nottingham Council figures, so give or take a thousand or so. There are apparently 400 in the 75 Mile Sportive that I do with the others making up the roadblock that we will have to overtake later. L opts for the 50 Mile Challenge Ride which gives me around a 30 minute head start in my quest to do 75 miles before she can do 50.

First we cycle the six or so miles to the start, no point getting the car out for that. Today is supposed to be a sunny day but down by the rowing strip at 8am its bloody freezing. It will warm up I keep telling myself as we are led to the start and reminded that this is ‘not a race’ but judging by the maniacal grins on the faces of some of the participants, oh yes it is. 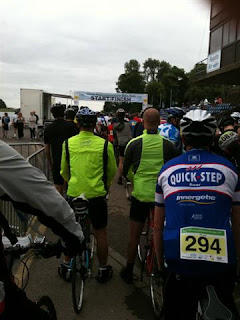 We both did the 50 a few years ago. I haven’t returned since, until now, because certain aspects of the course were simply not suitable for bikes, well not road bikes anyway. These were the last few miles through Colwick Park, a farm track near Newark and the first few miles out of the start at Holme Pierrepont which was full of craters so large you could hide a wheel in one.

Well the start hasn’t changed much. Still awful but less pot holes, although I see four people fixing punctures in the first mile. It’s now basically a rock strewn grit track. Thankfully this unstable surface doesn’t seem to have anyone off. Good job really as the pre-event information only recommended wearing a helmet. It wasn’t compulsory, not even on the Sportive. I’m not sure how this council sponsored event managed to square that with its own Health and Safety department.

The odd thing about this Sportive, as opposed to something like the Cheshire Cat, is the sheer number of mountain bikes doing it and the amount of people not in a hurry. L would call this riding sensibly. So at first it’s a real struggle to find a group of cyclists not riding sensibly and err, going for it.

Eventually when a red light stops the field five or so miles in, yes contrary to popular belief most cyclists do stop at red lights, I manage to rendezvous with some appropriate company. Then when we have to stop again to cross the A46 there is a further regrouping.

Now we’re motoring. Through Hawksworth and we whizz past a row of portaloos. Was that the first feed station? I didn’t see any cake stalls. No matter, too early to stop anyhow. Then suddenly we’re in Hawton, which I know is just outside Newark. Blimey, here already. Then as we blitz through Newark I don’t even see the refreshment stop as we are waved through en mass.

Hmmm, I think I’m getting a bit carried away here. This group I’ve got involved with seem to have no intention of stopping for a cup of tea and a wedge of cake. Perhaps ever. I resign myself to having elevenses on the go, munching on a chocolate bar and an energy gel whilst simultaneously draining my water bottle. Now I’m out of fuel.

The route had been pretty much pancake flat but now past Newark things started to get a little bit hillier. The group starts to splinter and before long I seem to be riding on my own, which isn’t as much fun. As we pass through quiet country lane after quiet country lane we eventually arrive in somewhere I recognise, Walesby. I pull over and check my map to see where the next feed station is, of which I am now in desperate need. About four miles I reckon.

So onwards around Ollerton and then there it is at the oasis of Wellow, which I think was supposed to be stop number three. I’m well knackered; I have been riding far too fast. The feed station has a bountiful supply of drinks and snacks, all for free. I find out later than none of the other stops are free. So it was very clever of me to have the forethought and planning to skip the first two stops and come straight here. I embark on a full lunch of cheese sarnies, four slabs of cake and three cups of teas. In fact I consider staying here for the rest of the day, well at least until the chocolate coated shortbread runs out. Then I realise that L would expect me to catch and overtake her, so I decided I best get on with it.

Now a couple of stone heavier I pedal down a few more nice quiet country lanes through Eakring and down to Southwell but then when we reach Fiskerton we hit the expected roadblock as we rejoin the 50 mile route. So it’s a case of picking ones way through the slower moving traffic as best I can. I arrive at the next stop at Thurgarton and see that L had texted me from there just 19 minutes ago. Whether that was as she arrived or as she left I’m not sure but clearly I’m right behind her. The chase is on. I have a quick cuppa, that’s 70p’s worth and a bottle of juice for a £1. I guess pedalling back up to the utopia of Wellow isn’t an option but if I do this next year I’ll certainly be stuffing my pockets up there.

The 50 milers aren’t all slower rides and I tack on to the back of three guys who are motoring. One is on a fixed gear bike with no brakes! Looks like a track bike. Hardly safe.

Then as we approach Nottingham, the Sportive riders are directed to stay on the A612 to Lady Bay Bridge rather than on the twistier route that would eventually take us through the racecourse and Colwick Park but it also means we miss the last feed station.

On the A612 I find myself on my own again with just the white vans and the juggernauts for company. It’s a nice straight route but a few signs confirming I hadn’t gone wrong would have been useful.

I started out clocking a nice 30kph average and I had hoped to maintain it all the way around but due to traffic problems as I cross the line it’s dropped to an annoying 29.9. My time of four hours sixteen minutes isn’t bad. All in all it wasn’t a bad route, as I said a few more signs would have been nice but other than those first few horrendous miles it was a good route.

I look around for L. Not here. Ha. Beat her.

Another small blip in the organisation was that there were no t-shirts this year. Apparently this was to keep costs to a minimum for participants. This is a bizarre thing to say when they are paid for separately. If they are subsidising them with the entry fees then just charge more for the t-shirt. Simple.

I sit on the grass and try to put on my cool, I’ve been here for ages look, as I wait for L to cross the line. Then we cycle home together. L’s pedals making an awful knocking sound, needs oiling me thinks. Don’t know how she put up with that for four hours. Though she’s now complaining of sore knees, so perhaps it wasn't actually her pedals that were clunking.

I catch a bit of the football before we head down for refreshments at one of our locals, which goes down almost as well as the famous feast of Wellow.