It’s too cold to cycle, maybe even a touch icy, or is that just the inner wimp in me speaking. L probably delays me deliberately, out of concern for my safety. Bless her.

The other option if I’m not cycling would have been to run in but I have to be out of the house before 7am to catch the right bus to do that. I’m way too late for that. I will run home instead.

Almost with the first email of the day L hits me with an enquiry about next year’s Bupa Great Manchester Run. Entries opened this morning at 08:30 and usually sell out pretty quick. The race has a 38,000 limit, which is big, very big. Entry is available on a first come, first served basis, until the final 10,000 places are left when the entry is changed to a ballot.

I suppose we might as well enter now, avoid the ballot and snap up numbers 1 and 2... Ten minutes later we’re both in but I don’t think we got 1 and 2. They’re probably saving the low numbers in case Gebrselassie really does come out of retirement.

Apparently the race goes through Coronation Street but even that didn’t put me off entering. I’m not that interested in seeing it, well not since Frisky the cat died. 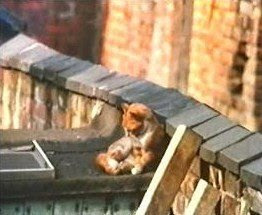 My coaching course tonight is cancelled. Typical council. It’s only week two and they’ve cancelled one already. They probably forgot to book the room. I suppose it’s convenient with me having a gig tonight. I’ll probably see the organisers there. My worry though is what will it clash with when they rearrange it. I haven’t got that many gaps.

I had tonight kind of sorted, my course was scheduled to finish at 9.00 but could well have finished earlier and I was quite confident of a 9.30 stage time for the Gaslight Anthem anyway. There are two supports and doors aren’t until 7.30. Although they usually come on early.

After work I jog up to Chaddesden, get the bus to Bramcote and then run home from there.

Now I have most of the technological training devices on the market but tonight I eschew the GPS and Nike Plus devices and just run with the good old fashioned ipod and my watch. I do after all know how far the route is and there’s no evidence to suggest these things actually aid speed.

It’s not far home from Bramcote, around four miles but a nice leg stretcher, which I do at a nice steady pace. Jogging perhaps. Ambling even. At which point I see a training aid that I really could use. This one is cheap technology. Well upfront at least, though the ongoing costs may be huge. It might also be difficult to source.

A whippet, all decked out in woolly hat, Lycra and avec pony tail, practically elbows me out of the way as she comes past. Ok she might have asked politely first but as I was all ipod-ed up so I wouldn’t have heard her, and then she rocketed off into the distance like... well, a whippet on steroids. Obviously that annoyed me. I had to chase her down and did eventually catch her. Though I didn’t dare get too close in case (a) she thought I was a weirdo who was about to attack her or worse (b) she got worried that I was going to overtake her and speeded up.

So I kept a polite distance and used her as a pacemaker. Had this actually been a race I would obviously have had to overtake her or at least embarrass myself failing. Her pace was just what I needed and much more effective than all these gadgets. I’m just not sure what L’s going to say when I ask her for a whippet for Christmas.

It’s an early start for Leamington Spa's Sharks, a 7.40 stage time, ten minutes after doors open. I'm stuck outside in the queue and suspect Sharks are playing to about fifty people but no. It's packed inside when I finally get in; they're already hanging from the rafters. What I see of Sharks is quite promising and thankfully they have nothing in common with the 70’s band of the same name. The only 70’s thing about them is lead singer/guitarist James Mattock’s sleeveless Exorcist t-shirt, a film that pre-dates him by a couple of decades. 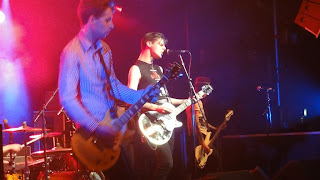 He strikes a confident figure, has a strong voice and overall I like their lively punk sound. They’re also a good test platform for my new camera. Well they are until, amid much confusion, they abort their set a song early due to a broken drum kit. Just how do you break a drum kit? Not seen that before and how does it hold you back. One drum, possibly a snare, surely does not matter much but they go off anyway. I’ll forgive them; they’re a young band who haven’t learnt the art of improv yet. Then again many experienced bands haven't or simply can’t be bothered to improvise when required.

The chap who walks on next and slings his jacket on the floor before tuning up an acoustic guitar could have been a roadie but how many roadies do you see in a flat cap? No this is Chuck Ragan who certainly fits the experienced description. The American singer/songwriter has been a member of Florida rock band Hot Water Music since 1993.

Like the Gaslight Anthem’s last UK tour support, Frank Turner, Chuck is another ex-punk rocker who has picked up the acoustic and gone folk. They like their maverick acoustic performers do the Gaslight. I’m obviously going to say Frank is better and he is. Chuck was good though, a bit more ‘throaty’ with his vocals than our Frank and whereas Frank has an entire band to back him, Chuck just has his side kick, John on the fiddle. It’s all very, well folk. All we need now is a spot of harmonica, which duly arrives on track four. Anyone called Chuck has to have a harmonica. At which point things do veer dangerous into barn dance territory but between them they ignite Rock City with their sheer energy, Chuck n John quite a match. Move over Kate n Wills.

And so to the Gaslight, who again come on stage a good ten minutes early. Isn’t that refreshing? Provided of course you’re not running late yourself, and thankfully with my coaching course cancelled I’m not. They’re known for playing ‘value you for money’ slots but will be up against one of Rock City’s immovable curfews, so it’s good that they’re getting started early.

Opening with their recent single, odd choice though it was, ‘The Spirit of Jazz’ they get the place jumping straight away, through another newbie ‘Boxer’ and the cracking ‘Casanova, Baby!’ 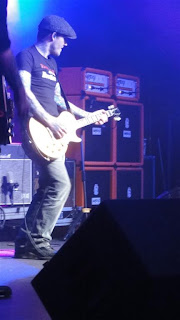 Then Brian Fallon launches into one of his huge monologues before they play ‘The Diamond Church Street Choir’, about cakes, and his mother, who told him that rock 'n' roll was from the devil and gives you STD's and he probably mentions other things but they are largely indecipherable due to his thick New Jersey accent. He rambles a bit, as perhaps you can tell and he’s fascinated by the balloons which have lights in them, so he bursts one to see how it works... and some lag predictably likens it to a condom, which is perhaps how we got on to STD’s and his mother, and maybe cakes but who knows. He’s prone to ramble a bit. Have I mentioned this? 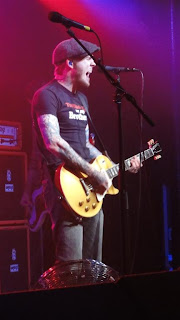 Oh and he also has his flat cap on... and the band have a flat capped roadie. So there’s flat caps everywhere tonight, just shows what I know.

He could have probably talked all night but he’s wasting serious music time. Which when it comes is seriously good. Then he picks up a harmonica in middle of ‘Old White Lincoln’, what else.

Of course nobody can mention the Gaslight without mentioning Springsteen and the band are now clearly sick of the comparisons but they did dig themselves a rather large hole with their second, albeit brilliant, album ’The 59 Sound’ and then shovel the soil in over themselves by going on and on about it. 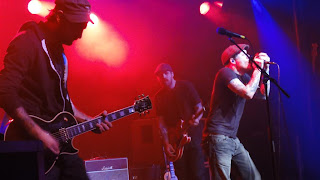 Now they say they’re moved on, grown up, but they will never get away from it. Though to be fair their new album ‘American Slang’ sounds nothing like Springsteen. It sounds like plenty of other things but not ‘him’. More importantly it sounds like them. Whilst despite the popularity of ‘The 59 Sound’, probably the reason for the near sell out tonight, their best album remains, in my opinion anyway, their first album ‘Sink Or Swim’ from which ‘We Came To Dance’ and ‘Wooderson’ are both particularly electric tonight.

On CD the new album comes over as perhaps a bit too glossy. Whose third album isn't? Live, as ever, it sounds much rawer. 'Stay Lucky' particularly appears faster and punkier, whereas some of the slower tracks sound much more epic and ‘The Queen of Lower Chelsea’ is a stand out moment.

Naturally there are a couple of covers. Wilson Pickett’s ‘In the Midnight Hour’ is instantly recognisable but Wayne Cochran’s ‘Last Kiss’ is met with many a bemused look and sends me scrabbling post-gig for someone with a stolen set list.

Then finally chance for the Brucie lovers to go ape with the closing duo of ‘Great Expectations’ and ‘The 59 Sound’ for which Chuck Ragan returns to the stage to assist.

The title track of 'American Slang' opens the encore but the highlight has to be ‘1930’ from 'Sink Or Swim' which follows. Before the slower ‘Miles Davis and the Cool’ leads us into the usual rousing finale of ‘The Backseat’. 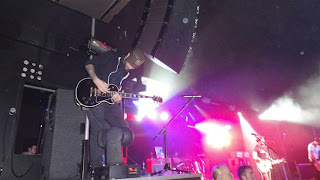 A damn good night. They missed a few faves out but very few bands rotate a set list like these guys do, and they’ll be getting those in Leeds tomorrow.