Someone asked L this morning how old our little puppy was. I wasn’t immediately sure whether they meant our nine year old who is in puppy remission or the one who will forever be known at home as ‘the puppy’ but is now two and half although going on six months old. She meant the latter and the woman’s eight-month-old collie dwarfed him for height.

Good news for Ilkeston Town FC, liquidated back in September. They now have new owners, SR Education, who are specialists in apprenticeships and training for sport. The club who had their status in the Blue Square North terminated will rejoin the league structure probably three to four levels down the league pyramid from where the new owners have pledged to elevate them back to the BSN within five years. Hopefully with better financial management than that of recent times. 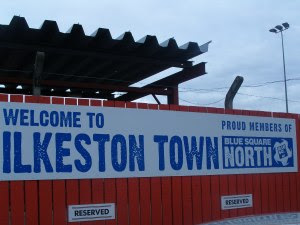 As I arrive home from training this evening I hear someone knock loudly three times at our front door. Daughter races down the stairs to answer it, opens the door and then stares at me accusingly. Why was I knocking? Do I not have a key? But it wasn’t me, I was unloading the car. It also wasn’t me thinks Doggo, I was having a sniff and weeing up that bush, as usual. In fact, possibly to emphasise the point, he goes back for another salvo. MD just barges his way past her and into the house in search of his dinner. Surely not...