As it’s now December 1st I can consider getting festive, only consider mind you. I hang the advent calendars, one each. One for Doggo and one for MD. Daughter’s not happy about that. In fact she’s appalled that I’ve bought advent calendars for the dogs and not for her. So she goes and gets one for herself. I hang it between the boys’ ones. 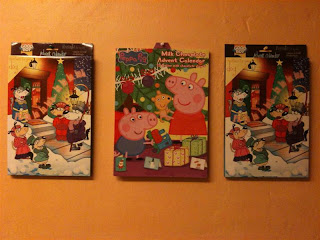 I get the bus again and it’s bang on time but there are only two of us on it. It’s usually rammed. They must all be on a duvet day. Once off the bus, it’s a nice walk in lovely snow, so un-British. 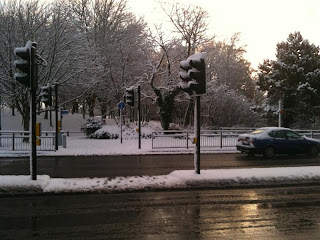 The weather is glorious, white over and bright sunshine. It could almost be Austria. 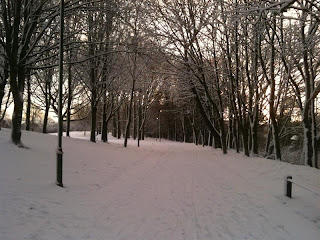 The main roads all appear to be fine but some of the minor roads look a bit challenging, including the street my company is on. We spend the first half an hour at work watching everyone drive round it sideways.

As you can tell, I’m really busy at work this morning. There goes the phone again. Someone requiring assistance. I slip my coat on and nip outside to assist with the snowman building. Which incidentally is a disaster. Wrong type of snow.

Having got over the advent calendars, Daughter is now as high as a kite. She has not only a day off today after her college decided to shut but also an offer from a university. Albeit from Huddersfield, which is in Yorkshire, and where it snows.

The local college here, The Roundhouse, was closed as well but they didn’t seem to have told the students. There were several dozen of them trying to break in.

The sandwich van doesn’t turn up so a quite a few of us have to put our coats on, muttering ‘I am just going out to Greggs and may be some time’, like Captain Oates at the South Pole, before disappearing off into the blizzard.

Shame on the sandwich van for not getting through, I get two parcels delivered today by different couriers. I'm impressed.

L spots a photograph of a former schoolmate of the kids in the newspaper. The lass is now a successful model and the reigning Miss Nottingham City. She asks our two if they remember her. Son replies with a few memories of whom she dated and whose class she was in. Daughter’s response is shorter and to the point ‘Yeah, she's a bitch’. Don’t you just love the differing responses?

We get sent home at 4pm and thanked for coming in, which is nice. All but two of our staff made in.

Dog training tonight is cancelled. No idea why.