I think I’ve done my knee in kicking Doggo’s ball across the park for over an hour. I must get him a new one, his current one is flat and takes some kicking.

Derby record their sixth successive home win, which keeps them in the dizzy heights of fourth place. Just ahead of Leeds and Forest... could get interesting. This win was if anything a touch fortuitous. A slightly dodgy penalty in our favour. Our new midfield player does have a few problems staying upright, mainly due to the fact he’s Spanish. Then having got ourselves 3-1 up, we give away a penalty and finish the match with ten men. We were hanging on desperately come the final whistle.

Post match, I rendezvous with L in Derby and we take the short bus ride to Burton and the very pleasant Coopers Tavern. Where they have a bit of a Kinver thing going on. The Kinver beers turn out to be pretty good despite all suffering from their individual blonde moments, e.g. they're all pale beers and not usually to my liking.

Then after a misunderstanding about the whereabouts of the 9.30 bus, e.g. we miss it. We have another hour to kill before the 10.30. Which is spent in the Devonshire Arms before we nearly miss the 10.30 as well. 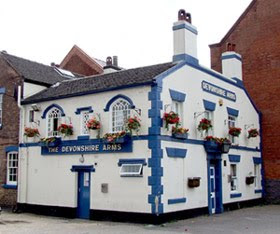