If It's Not Whippets, It's Buzzards

The other day I bought a new drinks bottle for my bike to replace my old mouldy one. The very next day it’s at college full of blackcurrant squash with Daughter. So I have to steal it back this morning.

It’s a bit traumatic on the road this morning. If it's not whippets, it's buzzards. Old buzzards that is, on bikes. Wizened old men who are actually incredibly fit and take great delight in burning off the allegedly fitter younger cyclists. One zooms past me in Spondon this morning. In fact he undertakes me at the roundabout, clearly I was holding him up. Problem is when I'm in old buzzard territory, I have a feeling I won't be burning anyone off.

L checks the Warwick Uni webcam. It's chucking it down. So I presume that weather is heading our way, just in time for cycling home.

Thankfully, I get home before the rain starts but the journey home is still not incident free. I’m passed by a not-quite-so-old buzzard. Probably around my sort of vintage in fact. There really is no hope for me.

Squash for the fourth week in a row, I'm spoiling him. I win the first game, easily. Which unsettles me more than it does him; lulls me into a false sense of security and its all downhill from there. Not helped by some very tired legs. Too many buzzard problems.

You can’t beat a good rumour and allegedly Rock City, possibly the Rescue Rooms and perhaps the entire DHP stable have been wiped out by fire. DHP own most of Nottingham’s music venues.

They quickly put up a correction on their website. Skunk Anansie were not fried alive last night. Everything is still standing and fully functional. Good job, we’re there twice next week. L is disappointed, she was looking forward to crawling through the charred ruins of Rock City to get our latest batch of tickets. 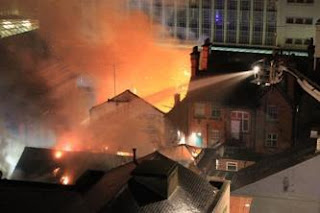 It’s a nearby Indian or was it bar, that went up in smoke. Formerly known as Posh Spice or was it Templars? We went there ages ago when it was called Anilas. It closes and reopens every six months. Won't be reopening for a while this time. 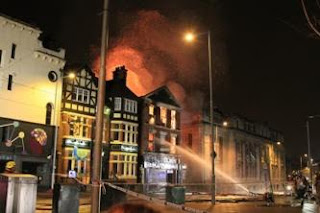