In Need Of Socks

After their walk this morning L texts to say Doggo needs some socks. Ah. Ice in the paws again.

There’s a rumour going around that they might start gritting the roads with sugar. Well what they’ve called 'sticky salt', salt that has been coated in sugar molasses to help it stick to the roads better. I can just imagine what a mess that’ll make of my bike. The salt on its own is bad enough.

I head over to training, half expecting us to get snowed in at the equestrian centre but nothing happens. Bit disappointing really.

Doggo is off his food tonight. So MD kindly steps in to help him eat it, until we haul him off. I offer Doggo a biscuit instead, which when he hesitates for half a second, MD nips in and steals. We have to extract it from his jaws. Honestly, that dog is food obsessed.

BBC’s Panorama programme tonight puts the boot into England’s World Cup bid. Quite why they and the Sunday Times wish to jeopardise our bid I’m not sure but it looks as if they might be successful.

It does surprise me though that some people expect organisations like FIFA, the IOC and even national Governments not to be, lets say, a bit dodgy, when that is often the default setting. They just don’t see themselves as... dodgy. With any of these organisations if you want anything from them you have to play their game or else you’ll get nothing. 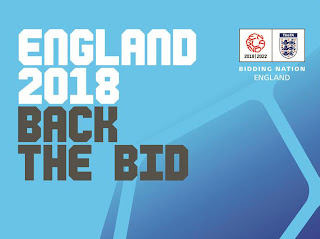 In the unlikely event that we still do get the World Cup it will probably be because the delegates will be worried what, if they don’t pander to the crazy English, our media will expose next.