There’s an inch of snow on the car this morning at 6.30am. I best not tell L or else she’ll stop me going to the dog show in Richmond. Which amazingly is still on, although they have delayed the start until 9am. It was 8am, so thank God for that.

The ring road is clear, so good on Nottingham City Council for overreacting to the cold spell. So its wagons roll. Slowly. The M1, oddly, isn’t clear. The traffic info reports that one jack-knifed lorry between J28-J29 southbound is blocking the road and another one is blocking the exit at J28 northbound. I’m heading north but people are causing congestion by slowing down to look at the incident on the other carriageway but how bad can that be at 7am? Quite bad as it happens. And the slow moving traffic hasn’t cleared the snow off the road.

It’s hopeless, at this rate I won’t get there until lunchtime. So I decide to abort, turn round and go home to surprise L. Well it’ll be more of a shock, three cold bodies rejoining her in the bedroom. Except we can’t get off the M1. J28 is blocked as I said, with the length of the queue at J29 that might as well be blocked and by the time I get to J30 I’ve seen the length of the queue going back south. So if I came off now I would have to risk the A roads.

As it happens the roads are now almost empty and snow free. In fact we’re back travelling at 70mph+. So we carry on. The M18 is fine. As is the A1. It’s a bit ‘interesting’ getting up the farm track to the venue but other than that all ok.

We miss walking MD’s first two courses but somehow we wing and a prayer it around them both. We’re clear in one but not in the other. The judge on the first one compliments us on our improvisation and then later hands us the trophy for third place, along with a rosette and a Cadbury’s selection box. Worth the trip already. That’s the high point of MD’s day but Doggo then has a real purple path. Three runs, three rosettes. 8th, 7th and then 4th. Excellent. There’s life in the old man yet. Ok the weather reduced the field by perhaps half but no complaints from us.

The 18 points MD gets for his third place moves him over the 75 point threshold, he’s on 85 actually, which means I can now opt to move him up a grade to grade 4 should I want to. People rarely do this and tend to wait for the win that forces you to move up. We'll wait for the win, at least for now.

Absolutely no problems on the roads driving back home so we’re in plenty of time to get to Rock City for our third gig in four days. We nearly did four in four, Paul Smith at the Bodega, but thought we ought to spend a night with the boys and I have it on good authority that solo he’s nothing special.

We might be in plenty of time but with a door time of 6.30 we still miss the opening band of three, Rewards. I didn’t even now we had three bands tonight.

We do catch second up, London’s Goldheart Assembly. Who were once supposed to be one of those happening bands but I don’t think much happened. Something might happen tonight though as they drag an oil drum on stage... The band have been known to use unusual objects as musical instruments and tonight appears to be no exception. Perhaps the fact that the bands two lead vocalists are both ex-zookeepers at Whipsnade Zoo accounts for such eccentricity or maybe not. 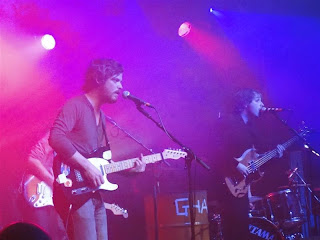 They start off a bit messily, with guitarist John Herbert on vocals, using the oil drum and I can’t really make head nor tail of their first two tracks. Track three though is mellower and much better with the bass player, James Dale, taking over vocals, which he seems to do from here on in. From there they kind of kicked on into a sort of more standard indie style and were rather good.

So to another hugely interesting set from We Are Scientists. Keith Murray and Chris Cain are two of the nicest guys you’ll ever see up on stage and rather appropriately they now have a song about ‘Nice Guys’ to open with. It’s probably not autobiographical, when Keith Murray singing ‘Nice guys finish last’ he can’t possibly be talking about himself and it doesn’t stop him complaining about the snow. Though I’m sure they have snow in America too. Perhaps he’s worried about it snowing in Rock City; it certainly seems cold enough in here tonight.

‘Chick Lit’ stokes an already lively crowd before ‘Nobody Move, Nobody Get Hurt’ makes things really kick off. The oldies are still the favourites. So much so everyone susses the intro to ‘This Scene Is Dead’ even if Keith does try to disguise it a bit. 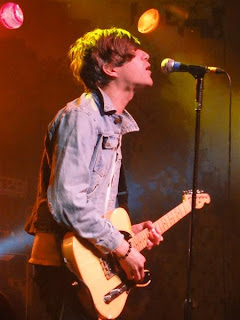 They roll ‘Inaction’ into it, a trick they do a few times, making up for the time lost to the inevitable stage banter which comes between most songs. Keith casually swigging on a beer, Chris appears to be on juice. The pair of them have a very good rapport with each other, honed through plenty of live shows, and with their audience. It’s clear they love what they do. Then Keith throws his beer at the drummer and... ‘It's A Hit’. 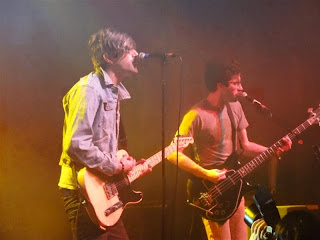 ‘Impatience’ is eventful. First some random girl dances across stage and then Keith breaks a string. He gets tangled in his shoulder strap as he attempts a guitar change and it’s to his credit that he manages it without missing a single word of the lyrics.

For ‘Textbook’ Keith leaves the guitar duties to Aaron Pfenning of 'Rewards', who we missed earlier. I think Rewards is basically just him, although random dancing girl might also have something to do with it but I’m not sure. He’s one half of the band Chairlift, who I vaguely know of. I guess we should have been here earlier if we wanted to know everything. 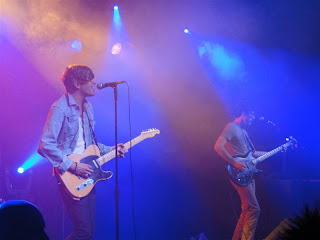 Once he is guitar-less Keith climbs the crowd barrier so that he can get closer to his public, well mainly the adoring female ones. Of which there appear to be many. In fact later, as we do our usual post-gig debrief, L only really talks about Keith's bare midriff.

‘The Great Escape’ is as popular and proficient as ever, but also many of the new tracks from 'Barbara' are well received. Particularly 'I Don't Bite', lead single 'Rules Don't Stop' and the excellent ‘Jack & Ginger’. What their material lacks in variety they make up for with the sheer energy with which they deliver it live. 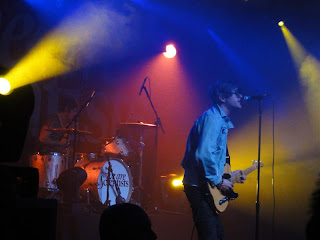 For the closing ‘After Hours’ Goldheart Assembly return to the stage accompanied by their oil drum, Aaron from Rewards and the random dancing girl for the usual communal sing-along. The Scientists always seem to bond with their support bands.

The encore of ‘Dinosaurs’ and ‘Cash Cow’ completes a short but very sweet gig, only just over the hour mark including encore.

Afterwards we chill in the Ropewalk. Chill being the appropriate word, its well below freezing outside. We discuss the gig and bare midriffs of course. No. I didn’t get a photo of it.