What Breed This Time?

-10 this morning, even I was cold and not helped by the fact that there was no heating on the bus today. Usually it’s too hot on there. I get off the bus in Derby and skate the rest of the way into work.

There’s plenty of snow in Langdale where we are supposed to be running this weekend. 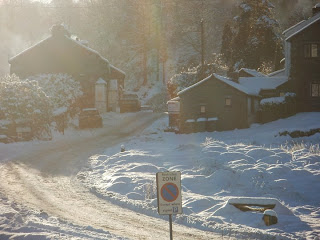 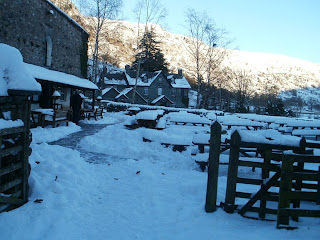 Perhaps I best look for a B&B.

Part of L’s Christmas list is a predictable as ever, the only variant each year is what breed it is this time. I was going to put a photo up of the dog concerned which was from the RSPCA Animal Shelter at Radcliffe but Pip has already gone. To a good home I trust.

Good news for some folk, perhaps. Heavy snow has forced an eight-day lock-in for seven people at one of Britain’s highest pubs, The Lion Inn near Kirkbymoorside. Suppose it depends what the beer was.

Another gig tonight. Our last before Christmas. We’re at the excellent Venue in Derby again. Three bands tonight. First up, Control. Who from their accent must have come down from Scotland with The View. They’re ok, although their lead singer seems to have a bit of a chip on his shoulder and seems a bit miffed about the lack of feedback from the small crowd. It’s early and they’re third band on the bill, what does he expect. Their indie-verging-on-punk sound is good though and their cover of ‘20th Century Boy’ is more than competent. 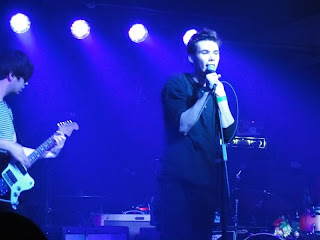 ‘Love In The Asylum’ was, as I recall, a poem by Dylan Thomas. Whether this has any bearing on the name of the next band I have no idea but I think we can safely say it hasn’t influenced their sound. They too are good and better than Control, more accessible too. Almost at once the crowd seems into them, as everyone mutters ‘Kings of Leon clones’. Yep there’s a definite resemblance but on closer listen it’s not their actual sound, just Dan Dunne’s vocals. He could easily pass himself off as Caleb Fallowill in a very dark room, there is no physical resemblance. Their music though makes for a pleasant half hour. 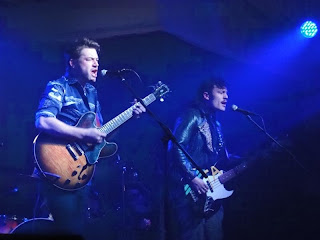 After they’ve finished and the roadies have done their stuff, I check my watch and it’s already 9.45. Oh dear. Now we're worried. The later The View come on the drunker Kyle Falconer is likely to be. Then we watch the roadies load up the stage up with alcohol. Not looking good.

When they appear, the band are upright and looking 'up for it' in a sober looking sort of way. As they open with the ska-punk of ‘Wasteland’ they’re sounding good too. After which they launch in to what appears to be a love song, a new track called ‘Grace’ I believe. Blimey, sober times indeed. 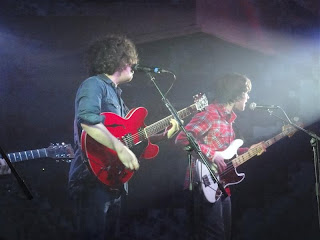 The ante is upped by the excellent ‘5 Rebeccas’ with the band exhibiting far more energy than a strangely restrained crowd and it takes the following ‘Wasted Little DJs’ to get the audience fired up. The fire though soon goes out and newbie ‘Tragic Magic’ is met with muted applause and ‘Realisation’ off ‘Which Bitch?’ doesn’t seem to get any recognition at all.

Kyle and Kieren have by now swapped places and instruments, staying that way for ‘One Off Pretender’, played for the first time on this tour, and then sharing vocals on the oddly popular ‘Skag Trendy’. 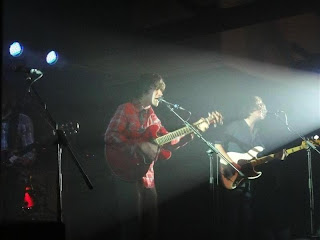 The crowd meanwhile remain very subdued, not much dancing, hardly any beer throwing and certainly no crowd surfing. Has the View’s bubble burst or is it just a poor crowd? The band perhaps don’t help by playing no less than six new numbers and the unfamiliar songs stall the momentum when it does threaten to get going. If that’s the reason, it would be a shame, because I for one like hearing bands play new material and the View’s new stuff seems to be pretty inspired, decent songs with big choruses. In fact I would take them in preference to some of their odder older moments.

The band themselves seem to have moved on a touch. They are a tighter unit tonight, so much less ramshackle than of old. More mature perhaps. You simply don't feel it's going to fall apart any second. Perhaps that’s to the detriment... They’re note perfect most of the time and what’s this? Keyboards? When did that happen? And they’re definitely going a bit soft, ‘this is another one about a girl’ I think he tells us, although translation from Scottish to English often isn’t easy, and I think it’s called ‘Girl’. So it does what it says on the tin. 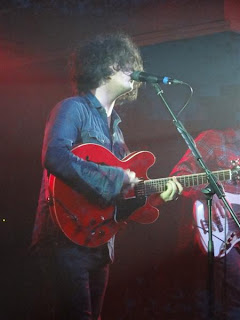 As Kyle announces that their new album is due in March, he doesn’t seem happy with the crowd, assuming he can see them through his fringe. He attempts to get a bit of banter going but it doesn't happen. This isn’t a banter friendly crowd, it's not really an anything crowd but also we can't decipher his Dundee accent. In fact we can barely catch more than a word at a time. So it doesn't happen. He's not happy about that. Cue a very inappropriate new song called 'Happy'. Which rather ironically turns out to be an infectious, corker of a track.

The crowd are so muted you forgot what is still to come and when ‘Superstar Tradesman’ arrives it’s almost a shock and it finally stokes the crowd a bit. 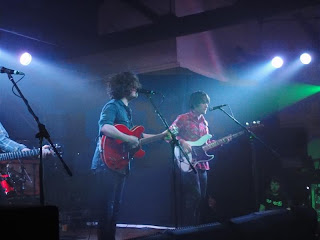 Then they’re bravely straight into a couple more new tracks. Although one of them, ‘Sunday’, is available for nothing from their website and it sounds excellent live. Then perhaps to emphasize their new found maturity Kyle reaches for a mug rather than a bottle. A mug? Get that. It could be coffee, although I suppose just as easily it could be full of a spirit. Who knows? Either way he’s still not enamoured with one of the least appreciative crowds I’ve seen in some time.

Despite finishing off with a storming ‘Shock Horror’ and the brief ‘Typical Time’, the band seem to have no intention of returning for an encore.

Finally there are cries of 'The View, The View, The View are on fire' but it’s too late. Bet they won’t be rushing back to play for us again in Derby. Tonight the View, whilst perhaps not totally aflame were certainly smouldering away nicely, unfortunately Derby wasn’t.