How To Avoid Doing The Tax Return

This morning’s Millennium Runs On 10K at Caythorpe has of course been cancelled. Probably unnecessarily as it’s now raining and most if not all of the ice seems to have thawed. We are going to be in such a mess when winter arrives.

Instead we stay in bed for most of the morning. Daughter is incandescent, pointing out she’s only had three hours sleep before going on to look shattered, as bad as the four legged wasters that we call collies, for the rest of the day.

I fit in a park session with the boys, before a quick brunch and then into town for the 3.30 showing of ‘The Kids Are All Right’. This gets me out of submitting my tax return which I had pencilled in for this afternoon. I could always do it later drunk.

So, for the second time in a week I go to the cinema in daylight. I’m breaking all sorts of taboos these days. I was always told you don't watch films or TV in daylight. For twenty years the TV companies even reinforced this by not putting anything of interest on during daylight hours. They tell me this is still the case but it no longer seems to stop people.

'The Kids Are All Right' is written, directed and I think most other things by Lisa Cholodenko. Who apparently writes from personal experience, so it’s kind of semi-biographical.

Nic (Annette Bening) and Jules (Julianne Moore) are an 'old' married couple but, and the clue is in their abbreviated Christian names, a lesbian couple. They also each have a teenage child produced with the aid of the same anonymous sperm donor. The test tube version one assumes. In many ways it’s an ordinary family with the kids constantly embarrassed and annoyed by their parents. 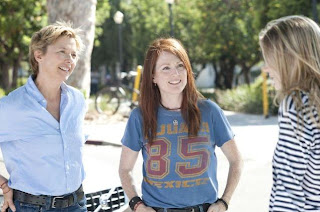 The eldest, Joni (Mia Wasikowska), named after Joni Mitchell, is now eighteen and legally able to track down her biological father without her Mother’s permission. She isn’t that bothered but is convinced to do so by her younger brother (Josh Hutcherson). Though we don’t get given any background to why the kids feel differently about it and why her brother is so keen. The man they trace is an easygoing restaurateur and organic farmer called Paul (Mark Ruffalo).

The brother by the way is a fifteen year old called Laser... 'Cool name' says his new found Dad. Errr no. Well maybe for a dog. Then again, no not even for a dog. 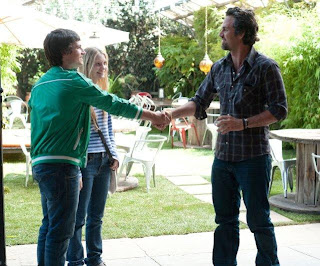 Paul begins to regularly meet with the kids and is taken by surprise by the fact he starts to feel very paternal towards them. He seems to have a positive influence on them and it starts to change him a bit as a person.

As for the mums. Jules is intrigued by this man who is undeniably part of her kids make up, yet also a complete stranger and she agrees to design and construct a garden for him. While control freak Nic is suspicious and jealous of someone she sees as an interloper in their cosy family set up.

There is a side plot about Joni trying to discover herself sexually and about Laser, well there’s not much about Laser actually, other than him stopping a friend of his inexplicably peeing on a dog...

The result is more old spice that hot ‘n’ spicy, so it's no wonder that Jules decides to get her next sperm donation the old fashioned way and throws herself into Paul's leather clad arms the next chance she gets. A turn of events that will no doubt annoy lesbians in their droves. Who knows if a girl can be turned that quickly and that easily but it’s a male fantasy that Paul can now cross off his things to do before I die list.

Consequently Jules spends more time getting athletic in Paul’s bedroom than digging his garden. Cue several gratuitous graphic love scenes, although we’d already had one earlier with Paul and his attractive female assistant. Jules will be pleased to know that he seemed to repeat the exact same repertoire in the exact same order with her.

One of the strongest moments of the film is when Nic has a scene with Paul at the dinner table, watched by the whole family, where she finally seems to come around to Paul's easy going charm, almost to the point of seduction. Jules looks mightily jealous and concerned. Then Nic discovers her partner’s hair in Paul’s bathroom and subsequently, when she snoops, in his bed... Hang on. A question if I may? Would you recognise your partner’s hair in the plug hole? I wouldn't. Long brown hair is long brown hair. You would have to be a mega suspicious person to jump to the same conclusion that Nic did and if your partner wasn’t even supposed to be into that gender, totally paranoid too.

This unsatisfactory discovery of their affair leads us to a very unsatisfactory ending. Well actually it’s a complete cop out. The film had created some interesting situations that were well worth exploring but then it all ended in such an illogical way. 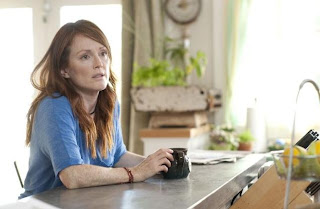 Jules grovels to the rest of the family, apologizes for her actions and assures Nic that she’s still an All American lesbian despite showing more than a few traits of being a rampant bisexual. So Jules rejects Paul, despite the fact he confesses he’s fallen in love with her. As do the kids, the kids that Paul has now realised mean everything to him. Enabling Nic to triumphantly tell Paul to go and find his own family, when he comes to their house to make his own apology.

So in the end the film never goes anywhere and everyone appears to end up back where they started, resuming their previous lives as if nothing has happened. Which is something I really hate to see in films.

It also caught me off guard. I’d thought all the way through I was supposed to be rooting for Paul, who after all didn’t ask for any of this and it was the kids who initiated the contact with him, but all along it was a film about two lesbians staying together in the face of adversity.

It’s an entertaining film but one that fails, frustratingly, to fulfil its potential.

I imagine in the end both kids went on to maintain contact with Paul, Joni did takes his hat that he gave her to college with her, meanwhile Jules presumably left Nic, anything else just wouldn't be realistic.

We retire to the Hand & Heart for a debrief, which I reckon is pub seven of my twelve pubs of Christmas and we’re still home for around 8.30. It’s an odd thing this cinema in the afternoon.