Today should in theory be Boxing Day but isn’t. If you’re looking for it, you missed it, it was yesterday.

This morning the annual Aston Walk. L and I do it. We skip the bingo number checking, they have numbers tacked to trees and if you get a full house you win a set of clothes pegs or whatever else was on offer at Poundland but it's all for charity so I'm not complaining really.

We just walk it or try to. The congestion is of Pride Park standards and is at first very frustrating but things improve eventually.

We still get to check the numbers later and I actually win something. It’s also not a set of clothes pegs. I win chocolate matchmakers, which I had no idea they still made. Although they are now called Quality Street Matchmakers... which I can't see the relevance of at all! 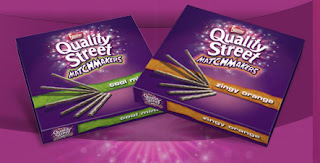 Then a pub lunch at Packhouse in Kings Newton. The beer is good and the food ok but they took a week to cook it.

Forgot to mention this yesterday. Hardys And Hansons' legendary Rocking Rudolph ale is back, again brewed 'down south' by Greene King and is now down to a watery 4.2%. This once great winter ale was once 5% and 'rocked', it was even briefly 5.5% but last year Greene King sold it at 4.5% and now 4.2%, hardly 'rocking'. Next year... who knows.

It's no wonder it now tastes so naff. I'm not really sure why they still bother with it, not now they have their own Abbot Reserve as a winter ale.