It’s very cold on park and a bit surreal. It’s very quiet, due to the cold I assume, and the first person I see is wandering across playing an acoustic guitar. First I think I'm still drunk and it's Alan-a-Dale. This is Nottingham after all and he's a character from Robin Hood. Surely though, that’s a touch cold on your fingers in this weather.

It’s busier when I get across the other side. Notts AC are out training obviously, most of them in shorts.

The weather plays havoc with the football fixtures and as a consequence our Fantasy Football league. Derby again get their match on and regret it. Losing again. It was interesting seeing the half time dancing troupe in their skimpy attire dancing around more energetically than usual, presumably attempting to keep warm. As they’re pretty much all of school age doesn’t this, these days, constitute some sort of abuse. Although when I was at school doing PE in subzero temperatures was seen as part of your education. Wearing gloves would have meant you were in for some serious ribbing. I can barely imagine how much playground abuse someone would have got if they’d taken the Premiership footballer approach and turned up not only in gloves but in tights and snood.

L does her second pantomime in two days, this time in Derby.

I collect her afterwards and we all head over to her parents place for snacks and drinks. This was all supposed to be part of an alcohol free build up to Sunday’s Bolsover Castle 10k. Which of course has now been cancelled. They say, despite the fact we’ve had no snow here at all, the amount of ice at various parts on the course meant that it was not safe for runners.

As I wait for L and Daughter in the city centre, a stretch limo pulls up behind me and turfs it’s cargo load of Santas on to the pavement. Joining the dozens of Santas already out tottering from bar to bar. There’s not a male Santa in sight by the way, which is a odd as plenty have the physique for it. Although there’s a lot to be said for Santa mini dresses, well there was until the limo pulls up. Six Santa sized Santas (try saying that after a few pints) topple out and it’s not a pretty sight, then the token slim one follows them. She can’t fail to pull in that sort of company.

These two weren't among them. 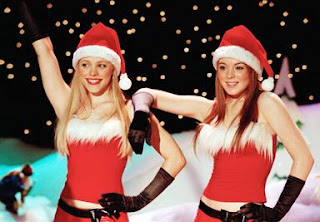 Later we rush home to try to catch some pictures of the severe weather conditions that are occurring down south on the late night TV news. Is that it? Half an inch on the M1 and it grinds to a half.