I ought to get up early and run in along the river. I bet the snow is great along there. It’s minus eight. I change my mind.

Sunday’s 10km race at Edwinstowe is off and has been re-arranged for January 9th. Ugh. Picking up a t-shirt with a Christmas tree on it on January, that won’t be pleasant. I was looking forward to it as well, a race in the snow, particularly after my training run in the white stuff on Tuesday.

I check the race calendar for a replacement and there are some races that are hopeful of going ahead. It boils down to a choice between the RNLI’s Reindeer Run at Dudley Zoo or Newcastle Dales Dash 10K, that’s in Newcastle under Lyme. I email both and the organiser of the Dales Dash assures me the race will be on and even brags of the ten centimetres of snow lying on the course. So that gets my vote. L reckons it’ll take a couple of Leffes to talk her into it. Only two? So she’s in as well then.

I worry that I might be delayed getting home, we have a gig tonight, as they’ve had to evacuate part of Derby city centre due to a car on fire in one of the multi story car parks but thankfully it all seems sorted by the time I get there.

Then five minutes after departing on bus, the driver pulls over, stops the bus, gets off and starts throwing snowballs at his own windscreen. What the... then I realise that his screen wash has obviously frozen up.

I make it home in enough time and then head down to Rock City. As I walk across town, a taxi pulls up outside Cast and two girls, inappropriately attired for the Arctic conditions get out. The skimpy dresses are one thing; the high heels another and predictably... whoops, down they both go on the ice. One dominoing into the other and taking her down as well. I stop laughing long enough to offer assistance. They’re not very grateful.

I meet up with L, who is appropriately attired for the conditions. She’s taking no chances and says she’s wearing practically all she possesses. She’ll be taking up more than her fair share of space on the front row.

Rock City haven’t got the stage times up for tonight’s concert but their website indicates three bands tonight so by getting there around 7.30 we expect to miss Dark Horses but we should be in time for the Duke Spirit, who I’m keen to see.

Not so. Leila Moss is just finishing up with their last track as we arrive. Only two bands tonight and Black Rebel Motorcycle Club on at 8.00. Oh well, at least not long to wait. Thankfully the band have made it up from last night’s show in Portsmouth. I had a feeling a bit of weather wouldn’t stop them.

The gig is billed as part of Rock City's 30th Anniversary Celebrations, not that this means much. Most of their gigs this month seem to be. It’s still something worth celebrating though.

It’s also landmark time for BRMC. They will be performing their 1000th live concert at the Brixton Academy on December 11th, which makes this their 994th.

They are indeed on at 8.00 and play through for a full two hours. The sound isn’t great tonight and the band are beset by a few technical problems. After the opening ‘666 Conducer’, Peter Hayes’s amp appears to pack up. As they sort it. Robert Been picks up an acoustic guitar and breaks into an unscheduled rendition of ‘Sympathetic Noose’ off their acoustic diversion album ‘Howl’. Hayes’ meanwhile lights up a cigarette. Naughty.

Been doesn’t quite finish ‘Sympathetic Noose’ before the amp is sorted and the boys are back to full volume and power with ‘Stop’. About time. They never play that for me, until now. 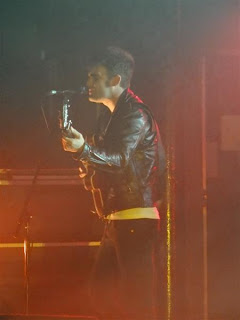 When I say ‘the boys’, that is slightly incorrect. Shock Horror. Black Rebel now have a girl drummer. It was their drummer, Nick Jago, who kept drifting in and out of the band. Seems he’s currently out and his place has been taken by Leah Shapiro, who has worked with the Raveonettes. Being replaced by a girl must almost be as bad as being over taken by one in a 10k. He has my sympathy. Of course, it's the done thing these days. It used to be bass players, and still is to a certain extent, but now its drummers.

Overall it’s a good solid show with a nice selection of old stuff blended with the new from this year’s ‘Beat the Devil's Tattoo’ album, which sounds much better live than on record, with 'Bad Blood' and ‘Half-State’ as good as anything they've done. 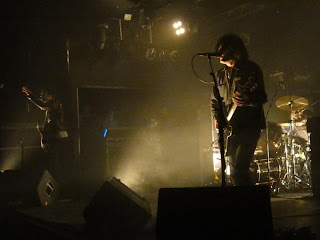 BRMC could easily survive on their no frills roof rattling numbers but instead, they deliver a good mix of slow and fast numbers. An old classic, ‘Whatever Happened to My Rock 'n' Roll (Punk Song)’, probably as old as Hayes’ shirt which has seen better days, gives way to an acoustic segment in the middle of the set.

At least Hayes’ shirt is black. Been takes off his leather jacket to reveal a very unusual site at BRMC gig, a white t-shirt. All his black ones must be in the wash. 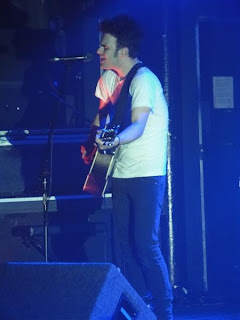 The slow numbers include an unexpected cover of The Pogues ‘Dirty Old Town’ done solo by Been. An interesting choice to say the least. Then Hayes takes up the acoustic baton with ‘Complicated Situation’ and ‘The Toll’. It’s quite striking that a band known mainly for their wall of sound are still lifting a lot of stuff off ‘Howl’, showing how good that album actually was. Perhaps not everyone agrees though. Some of the crowd talk through the acoustic numbers; in fact it’s probably the most chattering I’ve ever heard at a gig. Shame on those people.

Later Been even sits at the piano for another mellow moment, ‘Long Way Down’, before they return to the heavier stuff with Baby 81's awesome ‘Berlin’ and ‘Conscience Killer’ off the new record before they end by giving us a right pummelling with an oldie, ‘Six Barrel Shotgun’. 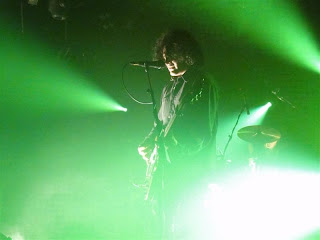 The amp seemed to go again at start of the encore during ‘Spread Your Love’. Time for another smoke eh Peter? Soon sorted though, which leads us into a fairly slow and moody finish with a double header of the brooding extravagance of ‘Shadows Keeper’ and finally ‘Open Invitation’.

L deserts me for the encore, fed up with a dodgy element around her spoiling the gig. I meet her in the Ropewalk where she has a Leffe in hand. I have to fight my way through a couple of inches of fresh white stuff to get there and it's still snowing. 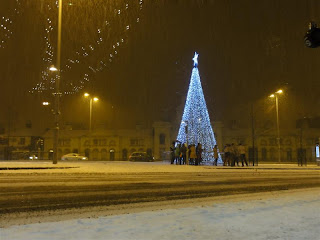 There are no buses running, so later we walk, well totter, home.