I Wouldn’t Even Know Where To Start

We had a bit more snow last night. I had to scrape it off the car. Nothing too exciting though.

Pardew? Well that’s that then. All bets are off. I won't be able to get any decent odds on Newcastle’s relegation now. 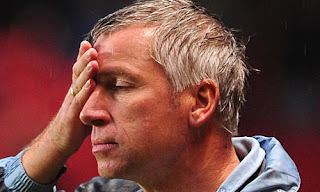 After work I finally bite the bullet and go to the leisure centre. My intention is to attempt both a gym and a swim session but with my track record the pool will be probably shut and the gym full. Amazingly though, neither is the case. I pedal an uncomfortable 15km on the bike, their bikes are the most uncomfortable ever devised. Then I run 2km on the dreadmill, which was all I had time for before heading into the pool for a brisk 750 metres (30 lengths).

I can proudly report that I trounced absolutely everybody in the gym. Macho blokes, Lycra girlies, the whole lot of 'em and especially the Chinese girl doing a workout in jeans and a woolly jumper. She was unsurprisingly sweating buckets. Maybe that was the idea.

Then... everybody trounced me in the pool. Especially one girl who dived into my lane and opened with two lengths of butterfly. We all go 'wow'. A chap says to me, ‘I used to be able to do that’. Brag. I wouldn’t even know where to start. After that though she just poddles up and down doing breaststroke and backstroke. Presumably creased after those first two lengths.

I get home, expecting to have half an hour to relax but L tells me I’ve had a call and dog training has been brought forward half an hour to 8:30. So I head off again. At least with the earlier start I should be back earlier.

Hmmm. So much for finishing early. Got an extended session but not a very good one. We did an hour and a half of start line waits. Which basically means a lot of standing, both for dogs and humans. On one of the coldest evenings of the year (-6 it was). We could have done with doing a lot of running around but no. Absolutely frozen. I can’t feel my hands. What’s worst was this was Doggo’s once a month session and he can do ‘waits’ for England. If it had been MD’s night it might have been more useful.