You can catch up all the populist TV just by listening to other people talking about it, so there’s no need to watch it really. Whilst walking the dogs on the park this morning I find out that that quite cute ex-Eastenders’ chick won ‘Strictly’ and her prize was to keep her dancer and take him home with her. Though my ‘source’, two old women and an old chap chatting merrily away about it all (ok three old women then), tells me they won because the pairing came over as a much more intense and intimate partnership on the dance floor than the rest of them. Skills they honed by being an intense intimate partnership elsewhere. A tactic which probably wasn’t contemplated by Ann Widdecombe’s dancing partner. Oh and a hot tip. Alan Sugar will hire the blonde lass who happens to be very easy on the eye to be his ‘apprentice’ because you would wouldn’t you.

On the way back Doggo stops for the now obligatory ‘I’ve got ice in my paw’ stop even though there’s no snow or ice anywhere. I tell him not to be so stupid. He looked a bit hurt at that.

I’m only on the park because today’s Bolsover Castle 10k got cancelled. That might have been a bit rash but rasher was the fact that Chelsea cancelled today’s match against Manchester United a full 27 hours before kick-off. Today they look a bit stupid as the TV beams pictures of lush green grass but no football. A cynic might suggest that they didn’t fancy facing Manchester United in the middle of the bad spell that they are currently experiencing.

So with no run to run it’s the gym for me. Now for a dilemma. Do I exercise to music or to my latest audiobook, Ian McEwan’s Saturday. L is appalled and suggests that nobody could ever exercise to Ian McEwan. I think she has a point. Music it is for my 15km bike and 3km run.

Then we head straight into town and to Broadway. Tonight we take in a Christmas film, although admittedly a slightly offbeat one, which is quite different from the usual cheesy Christmas fodder. How refreshing. Kind of.

A few days before Christmas, somewhere in Finland, some faceless corporation are excavating something from one of the mountains. Meanwhile in the valley below, the local residents are getting ready for the annual reindeer round up, only to discover they’re all dead. They blame the excavation team but when they go to confront them no one is there and they appear to have left in a hurry.

A young boy called Pietari reckons he has, with the aid of a bit of dedicated research, discovered what they were digging up. Santa. Buried there centuries ago because he was an evil guy who punished naughty children in horrible ways. Now they’ve dug him up and suddenly being naughty or nice becomes a life or death decision. When Pietari sees footprints on the roof outside his window, he assumes Santa is coming to get him.

The next day, Pietari and his father discover an old man who has fallen into their wolf trap. Pietari is convinced it’s the main man himself and eventually persuades his father, who together with some friends attempt to sell Santa back to the corporation that organised the excavation but they tell him it’s not Santa Claus but just a mere elf. 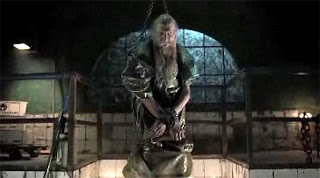 Then suddenly dozens of naked old men with long white beards appear out of the shadows, elves galore. The man from the corporation gets an axe in the back of the head and his helicopter pilot is dragged away and killed. They all run for cover into a nearby aircraft hanger but inside there is another surprise. The elves have been busy collecting all the naughty children. They’ve bagged them all up in potato sacks and taken them to meet Santa or rather the large ice cube with horns that is still being defrosted by dozens of heating appliances that the elves have pinched. A total 'elf and safety nightmare.

The smart kid, Pietari, of course, saves the day. After only a few ‘the grown-ups won’t listen to me’ moments, he comes up with a cunning plan and the film descends momentarily into action movie mode with a quite improbable situation of dozens of kids in potato sacks being airlifted to safety by helicopter. Then again, what’s probable about burying Santa under a mountain? It's just a shame we didn't get to see the evil Santa before they blew him up. 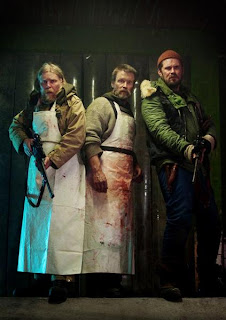 It’s a very original storyline, creepy in places but all done with a very dark sense of humour and the lad who plays Pietari is simply superb. The elves also deserve an honourable mention. Just how did they get all those old men to stand naked in the snow for hours on end? Ok, so may have been fake snow.

The daring rescue of the kids and the destruction of Santa just leaves them with one small problem. Well quite a large problem actually, 198 naked elves, who now without their master seem to have become quite docile. Can they domesticate them, make them like all the kids and perhaps become nice friendly Santas. Of course they can.

After the film we relax in the Hand & Heart with a few refreshments. Naughty, as it’s a Sunday but it is Christmas, almost, and we had planned this as a post-race treat. It wasn’t our fault it got cancelled.