Our condemned man is itching to go. He’s waiting with his bags packed when I get back from the park with the dogs.

We head off to Warwick where 5,700 other parents are unloading their baggage this weekend. There are a few suitcases as well.

We are greeted by a very vibrant sight, music blaring from the streets, an arrivals exhibition in full swing, bars and businesses promoting their ways and a nightclub schedule that doesn’t boast a free night until 9th November. An administrative error surely. The men dressed as pizza boxes are there, naturally, they are everywhere at the moment. They are promoting unlimited free pizza which is available all day today, as well as tomorrow, which is Son’s meals sorted at least until Monday.

His accommodation is right in the centre of things, so he’ll never be more than two minutes away from a bar, a night club, a pizza or even a Costa Coffee. As for lectures, who knows? We didn’t see any classrooms. His apartment overlooks a duck pond, so that’s Christmas dinner sorted and the pond, being directly under his windows is looking good for a few party games. He will be sharing but his room mate hasn’t arrived yet, so I can’t report on whether he’s a potential axe murderer or not. 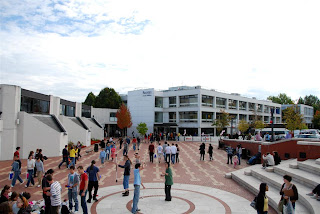 The Vice-Chancellor's makes his welcome address on the same stage at the Butterworth Hall on which we’ll be seeing The National in November. He goes down alright but is just basically the support act for the Student Union’s President who steals the show, although the Vice-Chancellor does come back for a brief encore at the end.

We offer Son a late lunch but I think he’s just keen for us to move on and leave him to sort out his stuff, stock up on free pizza and check out the social scene.

So we head off back towards home and the rest of our day, which includes making an appearance at some friends' joint 50th Birthday celebrations in the afternoon. Then after a quick coffee with L’s parents we head off for birthday celebration number two. A meal with my family to celebrate my parents’ birthday. It’s a Teppanyaki Japanese meal which comes replete with the food throwing antics of our own personal chef. You know the sort of stuff you used to get hung drawn and quartered for attempting to do at school. E.g. throwing chucks of fried egg for his customers to catch in their mouths and tossing whole eggs, still in their shells, to catch on their heads. This is done whilst wearing a hat which has been specially adapted for this purpose.

It’s surprisingly amusing because my brother, his eight year old lad who loves every minute of it (it’s clearly banned at his school too), and Daughter are selected for egg catching duties. All with little success, although my brother does catch one.

Then it’s finally time to dust off the yoke stains head home to our sadly neglected dogs. At least they will be well rested for their event tomorrow.