Last night we dropped Son off at Nottingham Trent’s Clifton campus where he had arranged to meet some friends. That was at about half-past-midnight. Four hours later he turns up back at our place for a few hours kip before departing again just before 7.30 on the next leg of his UK Tour, back to Warwick for an 11am seminar and then up to York for the weekend.

L had taken a bag of provisions for him with us up to Leeds. This had then travelled back with us and then had spent the night on his bedroom floor, via a stopover in Clifton. We hope the meat and cheese isn’t too rancid by the time he comes to eat them. It's done some miles.

The media is full of Wayne Rooney and the Liverpool sale. How this is of any interest to anyone outside the supporters of those two clubs I’m not sure but we’re being force fed it anyway. Thankfully the Rooney saga now appears to be over after he agreed a new five year contract just days after announcing his intention to leave over concerns that the club's squad was not up to scratch... Seems he forgot about that once they waved wads of money in front of his eyes. Unfortunately for Wayne, the amount of money they are now going to be paying him will mean they'll be none left for any new signings.

After work I walk to Chaddesden and then attempt to get the bus over to Long Eaton, where I’ve arranged to meet L. I get there five minutes before the bus is due but the electronic signs say that the next one will be in 24 minutes. How can that be, when the buses are every 20 minutes. The one after the one I was waiting for hadn’t even left its start location yet.

One eventually turns up, only around ten minutes late, I rendezvous with L and we head off to the Erewash Valley Beer Festival. This nomadic festival, which was originally held in Sandiacre then Ilkeston, is back on the calendar after an absence of two years. 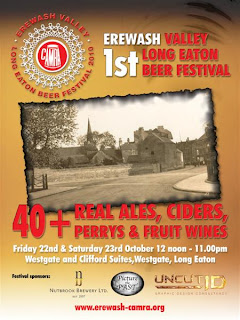 It is being held in one of the old lace mills in the town, which has recently been refurbished, The Westgate & Clifford Suites on Westgate. 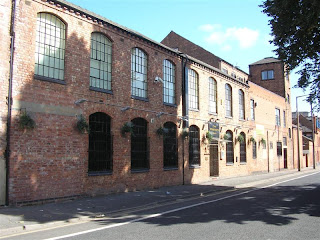 It’s only a week after the Nottingham Beer Festival but we reckon we’re up to it. A not too bad selection of beers as it turns out and almost all were from local breweries, which is how it should be.

There were a couple of repeat performances in L’s selection.