The courses for MD at today’s show are horrible. The jumping course was simply impossible for him. Despite the fact that under the rules at this indoor show we get two cracks at the same course, we got E’d both times. I even stopped him on the course after we’d been eliminated and tried the same sequence again, several times, still no joy.

Then we get another ‘E’ on a tricky Helter Skelter, although that was mainly my fault. Suppose it’s ALL my fault really, as I’m the handler. I’m hoping his agility course is a bit easier.

It is easier but it’s far from being a ‘gimme’ but MD nails it and goes clear. Then we do our second run and I try to make a few improvements. Not only does he go clear again but we’re two seconds faster than on the first run. Blimey. 6th place, a rosette, and a cash prize. £4 beer money! I mean Bonio money.

Doggo meanwhile goes well in everything, although not clear in two of his five runs, and gets a 6th place, and then later a 4th, but doesn’t even get a rosette because there are less dogs in his classes, so the prizes don’t go down as far.

That 4th was almost a 3rd, which would have got us something. Despite the fact I needed to be back home sharpish, for an early gig tonight, I was hanging on and hanging on cause he was holding that position for ages until eventually he was pushed down to 4th and we could leave for home, empty handed. Sob.

Back in 1985 I recall seeing New Model Army make an appearance on Top Of The Pops with their single at the time ‘No Rest’, which went top 30. Most striking, apart from the great song, was the bands T-shirts with the slogan ‘Only Stupid Bastards Use Heroin’ which the BBC didn’t quite know how to deal with, what with it being a bit too confrontational for them but at the same time appearing to give out some rather good advice, that probably fitted in with its remit as a public service broadcaster.

It wasn’t long after that that I was persuaded to go see the band in the flesh at Rock City. It soon became a regular occurrence, going through the routine of donning shin pads, putting all valuable belongings in a very safe pocket and double checking the life insurance before heading down to join in the mosh at these exceedingly 'lively' affairs. The band's fans have always said the concerts were friendly occasions even though you’d be counting the bruises afterwards. They may be more on the friendly side these days but in the earlier days I’m not so sure. Perhaps it was just other more unsavoury types attaching themselves to the band at that time.

This was all some time ago and I don’t think I’ve seen them in at least five years. Consequently I have somewhat lost touch with their material but rather like 25 years ago I’ve been persuaded down to Rock City tonight for the second of their 30th anniversary shows in Nottingham. Rock City has, despite the band coming from Bradford, become somewhat of an adopted home for them. The band are playing two consecutive nights in various cities worldwide playing a different set each night and supporting themselves. There are only two shows in Britain:- London and Nottingham, so people have come from far and wide tonight to pay homage. I hear they played 29 tracks last night and we’re due a completely different selection tonight. Tonight, by the way, really is their 30th anniversary. The bands very first gig was in their home town on 23rd October 1980. Exactly thirty years ago.

Justin Sullivan, the band’s lead singer, guitarist and only constant factor in the bands existence takes the stage a little after 7.20 with just an acoustic guitar and his fellow guitarist for company. It’s a gentle start and hey, I know this one, ‘Heroes’ from 1986’s ‘Ghost of Cain’ album opens the night. I don’t know much else of what follows, save for ‘Lovesongs’ again from ‘Ghost of Cain’, in a nine song ‘support’ slot which includes a mix of material across the 30th years of the band and even includes a b-side ‘Modern Times’. 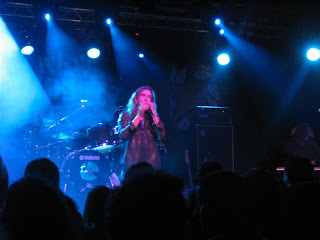 Throughout this set they gradually build up the pace and the instruments, first the drummer joins them, then the bass player. Sullivan’s long term partner, the artist, novelist and poet Joolz Denby who has frequently worked with the band makes an appearance during ‘Space’ (from 1990’s ‘Impurity’) before they close the set with ‘Ocean Rising’ from last year’s ‘Today Is A Good Day’. 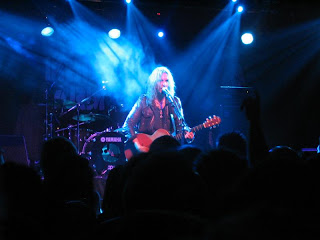 After a twenty minute break they return to the stage and are straight up to full throttle. The crowd are also now well warmed up and I let myself drift backwards away from the stage as mayhem erupts during ‘Christian Militia’ from their debut album 1984’s ‘Vengeance’, to avoid having to explain the multiple bruising to L later. Now they’re in my era. This is how I always remembered New Model Army nights absolutely heaving and one constantly moving dance floor.

Another obscure track ‘Falling’ gives way to a few newer numbers before another track from ‘Ghost of Cain’, unsurprisingly well represented, ‘The Hunt’ stirs things up again. The usual no crowd surfing signs were up at Rock City and I didn’t actually see anybody doing any but instead we get a bit of ‘crowd walking’. 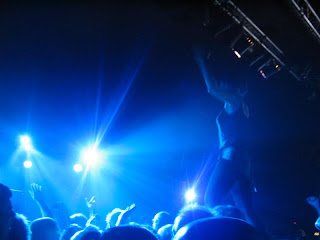 At one stage they were building a human pyramid which predictably collapsed. 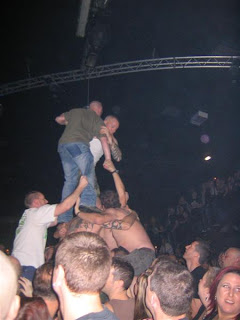 Security doesn’t usually put up with any of that sort of behaviour, not these days, but it appears as it’s a special occasion and it’s the ‘Army’, I think security have been given the night off.

‘Get Me Out’ from ‘Impurity’ and ‘Here Comes The War’ from 1993’s ‘Love of Hopeless Causes’ are more stand out moments before an awesome threesome close the set. ‘White Coats’ (1989’s ‘Thunder and Consolation’) is followed by ‘51st State’ (‘Ghost of Cain’ again). Referring to the subject of the song, Justin points out that ‘some things haven't changed in 30 years’. It’s a reworked version which verges into reggae territory in the middle but still doesn’t stop the crowd singing every word back at the band. Then finally the track I mentioned right at the beginning, ‘No Rest’ (1985’s ‘No Rest For The Wicked’) finishes things off.

They return for a five track encore, which may have been longer had it not been for another of those annoying 10pm curfews, that concludes with a double from ‘Thunder and Consolation’, ‘Stupid Questions’ and then finally what he describes as the only way to finish, with ‘I Love The World’.

If there’s a drawback for me, being an old git, is that there is only one track from each of their first two albums tonight. Particularly as I’d expected the place to be full of fellow old gits but surprisingly it’s not. There are an amazing number of people, who as Justin points out, were not even born when they started.

There’s time for a quick pint before I head home to cook up some healthy pasta to fuel up for the run tomorrow.