A Couple Of Seconds With The Staple Gun

This week is National Chocolate Week. 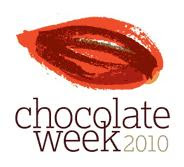 Not that I shouldn’t really say that, what with two women in the house at home. In fact I had considered mentioning next week that last week was Chocolate Week but thought that was perhaps too cruel. Then again, perhaps not. 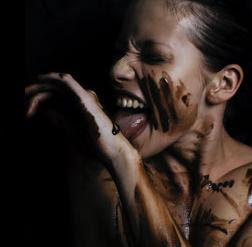 I run into work and nearly get run down by a cyclist. He would say that I should have seen him coming and I did, as he had fairy lights flashing away all the way down the front of his jacket. I just didn’t know which way to jump, plus I think I was momentarily dazzled by all his lights. I’m not sure all that illumination is really necessary, just to ride on the pavement.

That incident apart, the run goes well. I felt fit and I never feel fit in the mornings. I’m also fairly sure it was quite a quick time but I don’t know, as I chose to run with ipod and watch rather than my usual approach of phone and mapmyrun, then my watch battery went. I have no watch at all now, as the strap has broken on my proper watch. That watch is sat on my windowsill at work waiting for me to take it into town for a new strap. As I sit looking at it, a thought occurs to me. Hmmm. A couple of seconds and a few goes with the staple gun later, it’s as good as new.

I catch up with some more of the Commonwealth Games and watch the potentially lethal squash doubles. Fascinating and amazingly no blood yet but I can see why they're all wearing protective eyeglasses.

I'm not sure what's going on here though, between the two New Zealand girls, Jaclyn Hawkes and Joelle King, who had just defeated our English girls,
Jenny Duncalf and Laura Massaro, for the gold medal. 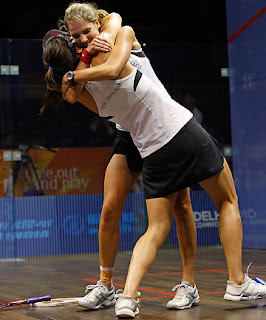 I have a night out in Derby after work whilst L goes to the Booker Prize evening. Kind of. Not the real one, hers is at our local library, where they are read excerpts from the six books on the shortlist and get to vote on the winner. 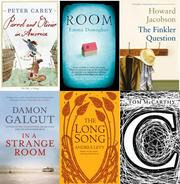 Everyone disagrees with the actual winner, Howard Jacobson's 'The Finkler Question', but isn’t that always what happens. L always says the winner is unreadable. So I’ll skip that one then, although I do need something new to ‘read’ now that I’ve finished the Pelican Brief.