It would have been a rather pleasant ride into work on the bike had not the intermittent rattle on my bike returned. I think it always happens when I get the bike wet, like I did in that downpour last week. Best get the oil can out tonight.

It cheers me up when my favourite terrier (not) spotted me and chased my bike again, with its owner still attached to its lead. That always make me laugh.

Then someone tried to wipe the smile off my face by opening a car door on me. I actually heard the click of the door opening and reacted immediately. Which is a very good advert for not wearing headphones whilst on the bike like a worrying number of people do. Losing the ability to hear could be fatal on a bike.

I have a gig tonight and it could be a difficult one to blog. The Twilight Sad appear to have no website, no forum, no recent setlist.fm listings and no live reviews of their current tour. Add to this the fact that, although they have a great line in song titles, the titles bear little or no relation to the song, so much so that the band themselves can’t even remember them and resort to cryptic codes on their own set lists. Then throw in instrumental band Errors as support and you can see I’m going to be in for a tough evening set list wise. Even if the bands were to introduce everything, what with them both coming from in and around Glasgow, it probably wouldn't help as I won’t be able to understand the accents.

So first, Errors, last seen at Summer Sundae wedged between The Besnard Lakes and Los Campesinos. They are billed as co-headliners, which means they get fifty minutes on stage and I suppose theoretically even an encore.

Well, honestly I haven't a clue what they played but it was good and the small crowd at Stealth approved. There was nodding aplenty from a crowd desperate to sing along to their infectious blend of electronics mixed with traditional guitars and drums, but with nothing to sing along to, a good old nod had to do instead. Sorry... I just don’t really go for instrumental bands. I'm not sure of the point but presumably they are. Perhaps, to get their music used as backing tracks by the BBC. Which these days seems to be the ultimate endorsement for any slightly obscure band and in this case the BBC don’t even have to strip the vocals off. How convenient is that? 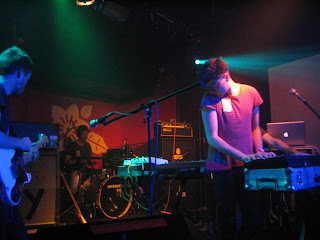 Errors like everything just so. Their lead man Simon Ward seems a bit of a perfectionist, often signalling instructions to the sound desk and then smiling to himself when it all goes to plan. The Twilight Sad on the other hand are much more rough and ready, brash even. They start loud with the lead track from their new EP ‘The Wrong Car’ and get louder.

By track two, ‘That Birthday Present’, I had already realised that in my eagerness to get a look at their set list I have made a tactical error. I am standing far too close to guitarist’s Andy MacFarlane’s amp because the wall of guitar noise that he is producing is now swallowing me whole. So much so that most of the time I can’t hear James Graham’s vocals at all or the keyboards. I know there are some keyboards in there somewhere. 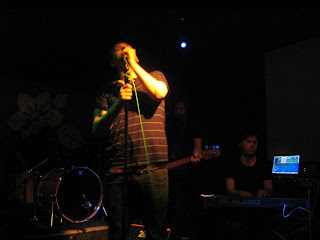 I consider moving across to the other side of the stage to see if I can hear the keyboards or perhaps moving to the back in the hope that I can hear everything but then a) I wouldn’t be able to see and b) I fear the damage has already been done to my eardrums.

Their albums, particularly their first one ‘Fourteen Autumns and Fifteen Winters’, are quite sombre affairs which did not quite prepare me for the intensity of the band live, where the cacophonous noise dominates everything, unlike on record, where the guitars are reigned in, letting the vocals shine. 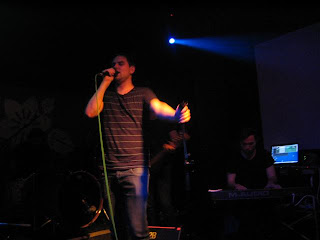 More blistering guitars obscure their finest vinyl moment, set listed as ‘hit single’, more commonly known as ‘That Summer, at Home I Had Become the Invisible Boy’. Gripping his microphone in both hands, James Graham’s face is a mass of anguish as he delivers his impassioned vocals. Sometimes I can even make them out and at the moment he is informing us that his ‘kids are on fire in the bedroom’.

He frequently stands sideways to the crowd, appearing lost in his own world and I can see why he’s often compared to Ian Curtis, although isn’t everybody these days. Although this guy even sound-checked like I imagine Ian Curtis would.

‘I'm Taking the Train Home’ is equally piercing and far louder than its vinyl counterpart. The floor starts shaking. Did I mention that the Twilight Sad are loud? Very loud. Not just ear bleeding loud but nose bleeding loud and probably causing internal damage loud too. As I walked down to the gig tonight I had to thread my way through the hoards queuing to get in to see Mumford & Sons at Rock City, probably less than a hundred yards away as the crow flies and this lot are trying to drown them out. 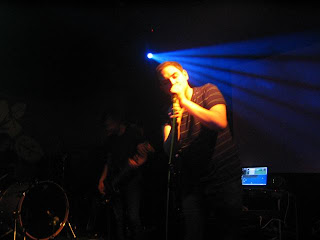 Then a quiet moment. A slow burning start to ‘Cold Days From The Birdhouse’, sung pretty much guitar-less, until the song eventually bursts into life, well exploded if I’m honest and practically blasted the head off the front row. The song as a whole though worked well live and was undeniably the best bit tonight.

Then to close, the noisier but still slow building, ‘And She Would Darken The Memory’ driven again by MacFarlane’s guitar and the powerful drumming of Mark Devine.

Then James Graham thanks us all for coming and for not going to see Mumford & Sons. Wouldn’t have mattered, we’d have heard them from there anyway. I leave with my ears ringing. That was one incredibly loud gig. As an overall spectacle it was rather impressive. 10 out 10 for intensity but a lot less for audibility. I have to say overall the experience was a little underwhelming. I’d go again but next time, perhaps I’ll stand further back.