I cycle in and it’s very foggy again, well it is in Derby. Nottingham wasn’t too bad.

Apparently L’s dog was mega noisy this morning. Making up for being out-noised by Doggo at training last night obviously. He was so rowdy that when he got back from his walk, and began loudly demanding his breakfast, he woke Daughter up and you don't want to do that when her college day starts with a free period.

As you may have gathered I like a girl in figure hugging Lycra but this has nothing to do with why I’ve been watching the Commonwealth Games cycling every morning this week. I was very impressed with Becky James this morning, her cycling ability that is, as she clinched the silver medal in the women’s sprint on the track in Delhi and she’s only eighteen. Naturally I had to watch her terrific semi-final performance on the internet because the BBC were still being obsessive about the swimming and now the athletics as well. They did however wise up for the final, where she lost out to the vastly experienced Australian Anna Meares. Watch out Victoria Pendleton she’s on your tail. 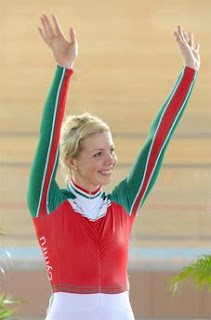 There’s a lot wrong with the Commonwealth Games because a lot of the sports just don’t get a good enough field, due to a lack of eligible countries. Track cycling should though be the exception though because the best two countries on the track are Australia and Great Britain, with New Zealand not being too bad either. However, what essentially could have been an enthralling head-to-head between the Aussies, who have almost a full strength team in Delhi, and the home nations has been a bit of a let-down because team GB has failed to turned up in any sort of force.

This is partly the fault of the European Track Championships which are coming up in November in Poland, a new event that has sprung up from nowhere and has been designated as an Olympic qualifying event. It also didn’t help that the World Road Race Championships in Australia were only a fortnight ago but the Aussies have coped with that inconvenience ok.

Whilst the individual events have been well attended by the ‘minor’ countries some of the team events have struggled for competitors. The highly specialised Team Pursuit had only three participants, Australia, New Zealand and a very game Indian team who were willing to have a go against the big boys. As it stood, with England choosing not to participate, the Indians stood to win an unopposed bronze. That was until the organisers persuaded both Northern Ireland and Wales to cobble together teams. Which they did do, made a competition of it and denied India the bronze, which went to Northern Ireland.

Why though, with the UK’s huge depth of cycling talent, weren’t England there in more force? It was thought that the UK’s first professional cycling team for some time, Team Sky, were a good thing for Britain. This week however they haven’t been. Top British riders who are on Sky’s payroll, such as Geraint Thomas, Ben Swift, Ian Stannard, Russell Downing and Peter Kennaugh said they were going but then pulled out. Whilst Sky's Bradley Wiggins never had any intention of going.

You can say what you like about Mark Cavendish and he’s not everyone’s cup of tea but he is in Delhi for the road racing this weekend, as is David Millar, and both have ridden the Tour de France this year as well as the other two big tours, Vuelta a España and Giro d'Italia, as well as the World Championships. Both must be knackered after a long season but they’re there and strikingly neither ride for Team Sky.

At squash I try a new serve, as see in Delhi. I stick with it all night, with moderate success but moderate success is step up from my old serve. Four very good games tonight, well three of them were good anyway plus we had dark ales in the pub afterwards. Followed by late night spam curry. Quite a night.