The Wrong Sort Of Stimulant

We have some fresh snow overnight and L goes out for a run in it. I’m well jealous. I haven’t got time to do so, having already enjoyed too much duvet time and then I having to take the dogs out for a ball session. This is enjoyable but very traumatic as the balls keep disappearing into the snow. 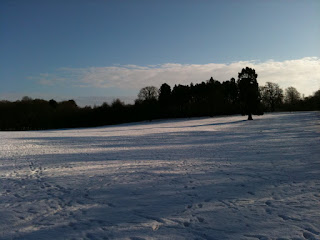 Then I get the bus over to Derby for the match, which is one of the few fixtures to have survived the weather. The postponements are also making it impossible to do the Fantasy League. We were joking last week about whether we could raise enough players to resurrect our own five-a-side team, well today I’m struggling to raise five-a-side team of real players for the Fantasy League and I‘m supposed to be picking fifteen. The games have been going down like flies over the last 24 hours. Trying to pick a team is like playing Russian roulette with the fixture list.

As I walk down to the stadium I at least discover the answer to one pressing question. That being why the council has already ran out of grit. The reason is because someone has layered it on the pavements around Pride Park about an inch thick, which is a lot of trouble to go to, just to get the game on. So if they need any, all they need to do is simply turn up with a lorry and a spade. Then they can scrape the excess off Pride Park and keep the rest of the city going for a few more days.

Although this may answer one question, it also poses another. Just why have they let the employees of all the companies on Pride Park slither around on icy pavements for the last couple of weeks and only get the grit out now because there’s a football game on?

It’s also bloody cold as I await the arrival of my father, who will hopefully have a flask of hot coffee with him. He has, but as my mother has dipped out of going to the game today, he’s packed a smaller flask. Damn, not really enough to get me through the whole game. At least he’s brought the whiskey to go in it.

As it happens coffee is not the right sort of stimulant required to get one through the game. Valium would have been more appropriate. Yet another apparently clueless team selection is followed by another clueless performance. Again no width and therefore no goals, save a deflected effort when already 2-0 down. It finishes 4-1.

After the match I meet L in Derby and we go for something to eat in the Royal Standard. Then we move across to the Silk Mill, which is disappointing because they haven’t changed their beers from last week, so we consider a move to the Flowerpot. Then a comfy chair by the real fire comes free and so naturally, we make do and stay the rest of the night.

One of our Christmas presents is playing havoc with my head, well my hangover. The bottle of Baileys seemed a pleasant and inoffensive thing for a nightcap but I’m not sure it’s been a wise choice at all. It’s not even the sort of thing I’d usually drink. Oh well, it’s nearly all gone now.
Posted by FitForNothing at 4:00 PM