This Is The Life

Another lie-in. Another breakfast cooked for us. This is the life. Oh yes and another run. The weather is fine today, although still cloudy. I run the hilly 3.5 miles over to Grasmere. L drives over and then hands over the car, so that she can run back. Only problem is that I’m the only one in running gear. So I strip off my running trousers and hand them over to L, who puts them on. All this is happening in the car park much to Daughter’s embarrassment but what are parents for, if not to embarrass their children. Daughter claims to long to have ‘normal people’ as parents. Well, tough. I complete the cross-dressing experiment, with my thoughts on the possibility of an extra £10 on ‘my fine is’, by getting back to the cottage and putting on L’s running trousers but Daughter rules this out as not being proper cross-dressing. 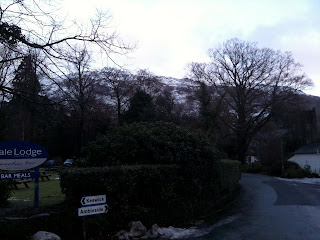 Daughter has spent part of the weekend working away on my mate’s laptop because she has some English assignments that are due in on Monday. On the surface of it this seems quiet harsh scheduling, as she has just spent a week doing exams but then again she’s probably been putting this work off since September. Turns out the subject of one assignment is about being unable to get an English assignment done because of, well the nonstop partying. L and I nod and agree with such a factual piece. Daughter claims it is pure fiction. A claim that probably isn’t backed up by her ‘my fine is’ tally. Well the bit about drinking coffee’s obviously fiction, as she hates coffee.

Usually we head home on a Sunday but this year we stay the extra night. Unfortunately the Grasmore Ale is no more but the Snecklifter is still going strong, despite all our efforts.