The Deep And Crisp And Even

As I’ve already mentioned, with the freeze predicted to last for some time, chances of biking this week at all are remote. However, as overnight we gained a nice inch of the deep and crisp and even stuff. Well it’s not exactly deep but I figure this morning would be a good time to attempt a run. It got to be better than running on the dreadmill, which is what I’ll be forced to do otherwise.

Snow can be quite good to run in when it is fresh and still quite grippy. This does appear to be the case as I jog up to catch the bus from the QMC. Unfortunately once I alight from the bus in Borrowash I realise that yet again Derby seems to have missed out on the white stuff. So I’m faced with a slither along icy paths instead. Thankfully the route down by the river allows for plenty of running on the grass which is good because running on the path is more than a touch dicey. Despite this I see almost as many bikes as usual, probably 30 or more, and only about half with sensible tyres. The rest of them on the sort of unsuitable mount that I usually ride. Despite this I don’t see any one fall off.

The next problem I face is due to latest bout of concreting over of the countryside that’s going on down there. They’re shut the river path again and divert me on to the main road, where more slithering ensues. I eventually skate into work, only six minutes slower than usual, which isn’t bad considering the ice and the detour that must have added half a mile.

L reports that not only has Daughter taken a tumble on the ice, mind she was probably Facebooking at the time rather than looking where she was going, but Doggo has taken a slide too. Both are apparently fine.

After work, I opt out of playing roulette with the ice pavements by running home and take the easy option of the Red Arrow instead.

I get home to find that Daughter has gone and had all her hair cut off, well not quite but it’s pretty short. Question is what she going to spend two hours a day doing now she has so little hair to style? No need for hairdryers, hair spray and the like.

The girls head off to see the Derby Panto or are they just going to see Neil Morrissey. 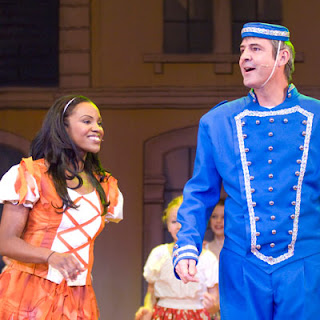 Either way I decline their offer to join them. Pantomime has never really been my sort of thing but I’m sure they’ll have a good time. Oh no they won’t, oh yes they will. Apparently the pantomime is packed out but there’s not a man in sight. Funny that.