Going Down A Storm

It seemed very icy as we walked back from the cinema last night and if anything it is worse this morning, so I duck out of my planned cycle this morning. It wouldn’t have been pleasant on the bike and it was particularly cold. My feet would have taken hours to thaw out. Instead of cycling I take the bus in and run home. I miss out on the weekly freebie on the Red Arrow, as I’ve already scanned my smart card. They really ought to put a sign up when they’re not charging, as they often seem not to.

After a successful gig the other night Daughter now plans to model herself on Emilie Autumn and her band 'The Bloody Crumpets'... This should go down a storm next time she goes to her father’s. 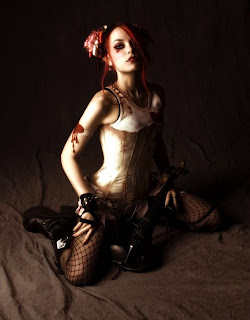 Just a ‘short’ run tonight as I have to negotiate MD through his training later. I run from work but miss-time my bus chase. It goes past me just before it disappears for its trawl around the housing estates, by my estimation it is four minutes early. I have approximately five seconds to decide whether to jump on or no. I don’t. Instead I race along the main road in an attempt to head it off. I don’t make it. I see if emerging from the estate and it’s now a good thirty seconds ahead of me and still running early. Damn. It’s gone. I run to the end of Borrowash, around five miles in all, and wait for the next bus. This according, to the electronic signs, will be twelve minutes and late.

I get cold waiting and don’t warm up when I get off the bus at the other end. It’s a chilly last three miles to home even with all the layers I have with me on.

At training, MD has it on him and gets caged for being disruptive and barking. I can almost imagine L at home giving a smug smile and muttering ‘told you so’. Hmmm, he’s not usually like this with me.
Posted by FitForNothing at 4:00 PM