Two Minutes And About Fifty Seconds

The black cloud that appeared in November and has been hovering threateningly somewhere in the distant future ever since, although gradually creeping closer, is now overhead. Yep, it’s Kilomathon day. My two work colleagues who were going to accompany me have both fallen by the wayside. One got injured and never trained for it. The other trained for it, then stopped, then decided he wasn’t fit enough. I’m not sure I’m fit enough either, but there’s only way to find out.

It is after all, as the organisers keep telling us, the world's first Kilomathon but perhaps simply because no one had thought of doing a race over 26.2 kilometres (16.3 miles) before. Which is to me still a bizarre concept but it’s a concept that may catch on, so expect to see perhaps even a Half Kilomathon appearing near you soon. For me though, it was purely the fact that this bizarre concept was from Nottingham to Derby that appealed to me. That’s from where I live to where I work, and almost even door to door. So I had to do it really.

It’s so door to door that we walk to the assembly point on the Nottingham University campus. They reckon they have 6000 entries and from the amount of people milling around, they might even be right.

The start is a bit of a mess though. It said on the published information that baggage buses, taking your stuff to the finish in Derby, would close at 8.30, half an hour before race start. This wasn’t good news because it’s March and it’s been a coldish March at that, so standing around, in race gear for half-an-hour in the cold was not an appetising prospect. Which could have been a whole lot worse had it rained.

It got worse though because as we arrived the tannoy was demanding that everybody went to the baggage buses NOW, as they would now close at 8.10. As it happened, it turned out to be a lie but attempting to rip up the published timetable like that, which was rushed anyway, and subject people to 50 minutes of cold, was not the best of ideas.

The pre-race warm-up was already in full swing and not very well attended, understandable really. What's the point of a warm-up an hour before the start of a race?

Still I was stripped and in my colour coded assembly pen, shivering with all the others, as demanded half an hour before the start, simply because I didn’t want to lose the good start I had been given. My slot was in the first block of runners behind the elite few.

Half an hour also seemed to be the average waiting time for the toilets. I think they ought to look at festival style urinals next time because they’ll never be able to rent enough portaloos.

Then they walked us up to the start, which was on the main road, where we had to wait the twenty minutes until 9am, whilst the rest of the race assembled behind us. I line up alongside a chap who is using the race as a training run for the Edinburgh marathon. If that didn’t make me feel inferior he went on to brag about his two previous marathons, in Prague and Berlin, of all places. I nod and smile politely before turning my back on him and talking to the chap on the other side of me. He was a fell runner, who was feeling a tad unfit after a decadent holiday, so he’d gone out and run twelve miles on Tuesday and then twenty miles on Thursday. My jaw was already on the floor when he told me that he too was using this event as training, in his case for a forty mile trail race next week. I’m doing an 18km trail race next week I mumble quietly, secretly hoping no one hears. Then I shuffle backwards a bit and leave the two of them to talk among themselves.

Finally, we start. It takes me seventeen seconds to cross the start line. I find out later that apparently it takes L ten minutes, so it must be a fairly big field. After the problems pre-race, once it got started, the organisation was much better and I really enjoyed the race. Although I feel I start too slowly, or perhaps it was just those seventeen seconds at the start upsetting my timekeeping but then I go a bit too quick compensating before I finally settle into the right pace.

One of my key concerns was whether the course would be marked out in Km’s. It ought to be, being a Kilomathon, but all the maps they sent out were marked in miles. I didn’t mind either way, as I’ve been running in miles for the last two weeks but would like to know for sure in advance, to get my head around which of 4.30 per km or 7.20 per mile it’s going to be. That is to break my target of two hours. L’s reason for knowing is even more vital, whether to carry twenty-six jelly beans or sixteen. I hope she has deep pockets, it’s in km.

Some folk claimed that the markers were easy to see, I beg to differ. They were too small, dark in colour and didn’t stand out at all, despite the fact they’d put red streamers on them. Personally I’d like flashing lights on them; organisers please take note for next year. So I missed half of them and in the end I stopped looking.

Eventually I got into those steady 4.30 minute km’s but start to losing the pace far too early, in fact in the 11th km. I blame the head wind, which seemed to be with us nearly all the way around and was making this harder than it should be. I already knew the course was slightly uphill, pretty much all the way, and I soon started to notice how relentless this was. Perhaps when they hold this again next year, they could run it in reverse?

That is, if they hold it again. The race needs to build itself a solid base of local support. Unfortunately there were too many idiots using ‘adhoc’ toilet facilities both near the start and in the first mile. So that probably put paid to the good will of the local residents. Although that all comes back to the portaloo farce earlier.

The crowds lining the course were vocal but smaller than I expected, perhaps not enough advertising was done. Race wise though, the course was well signposted and enthusiastically marshalled and the drinks stops were good. Although energy gels at the first stop as well as the second would have saved me from having to carry my own.

At half way I’m almost bang on the hour, on target and bang on the required pace but I’m only on target if I can hold this pace and I know I can’t. At 18km it starts to go out again but I must have had a brief revival because at 21 km, which is half marathon distance, I’m only 14 seconds down on last week. This isn’t much but I’m not feeling as good as last week and my pace soon slips out to 5 minute km’s.

There’s a rather odd section just outside Elvaston Castle Country Park where they send us around a hairpin of cones, presumably to make the distance up. We then enter the park and do a rather pointless loop there, that didn’t even take us past the house itself. Some people will have liked the variation in terrain but not me. Then we do another small loop out to Ambaston. It would be nice if in future years they ditched these bits and extended the start and finish closer to the respective cities, making it true city to city.

Then it’s the final stretch through Alvaston to the finish on the park there, which they could have made more of and better for spectators but the post-race facilities were good. I headed straight to the beer tent (naturally) for my free beer where I chatted merrily to the other runners there. With hindsight this was a mistake. What I should have done was grab my free beer and take it up to one of the other tents where the girls from University were giving out a free massage. By the time I found out about this particular perk, the queue for the girls was already out of control. 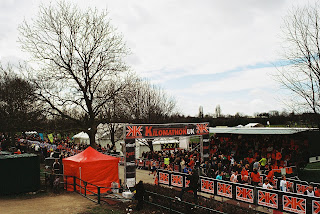 In the end the race took me two hours, two minutes and about fifty seconds. That's two minutes and about fifty seconds off my target. Suppose it’s not much if you say it quickly but I was gutted naturally. I just ran out of steam towards the end. I could have done with them handing out a fresh pair of legs at the last drinks station or perhaps, organisers please take note for next year, they could relocate the University girls to there? That might help.

I’m still secretly pleased of course, as I did beat around 4000 others, as well as my two ‘no show’ work colleague and of course all those who never got off the sofa in the first place.

The T-shirt is ok, I will wear it with pride to the pub but it’s not something you would race or train in, so the organisers have missed out on the chance of some good publicity there. Then there’s the medal which is some serious piece of metalwork.

If I was secretly pleased, L was shouting her delight from the roof tops as she beat her target time by some distance. The organisers must have been impressed too, as she got a personal text message of congratulations from them afterwards. I didn’t! But perhaps I didn’t leave them my number.

Overall a good event, which needs tweaking a bit but I’d definitely do it again. I’ve got to really, to beat that pesky two hour mark.

We then stagger/walk/crawl into Derby whilst my ever supportive father goes to fetch my mother, so we even get to celebrate mother’s day with Sunday lunch in the Royal Standard and so many pints, that we’re too sloshed to go out as planned in the evening.
Posted by FitForNothing at 4:00 PM