It’s turning into an expensive weekend. Not only do I have to replace a wing mirror on the car, we may be looking at a new tent now as well. The zip was already a bit dodgy before Doggo managed to put his head through it. Now it won’t fasten at all. Cheers mate. Once Doggo had dug the escape route, naturally it was MD who was the first dog with his paw up offering to lead the escape party. He immediately exploited this breach in tent security and had to be hauled back into the compound. Although we attempted to safety pin the entrance closed, L ended up spending the night lashed to him by his lead, just in case he fancied a nocturnal jaunt around the campsite. 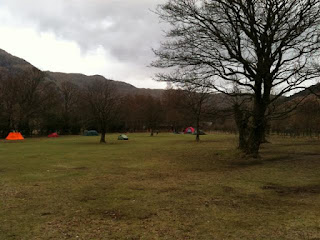 We also find out that the Langdale campsite are installing barriers to prevent people using their car park but they will also prevent access after 9pm. I’m not quite sure how that’ll work but it appears it may prevent us and many others turning up late to camp on a Friday night. So could be a serious money loser for them. 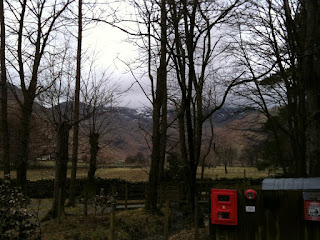 Eventually we head home, via a Sunday lunch. Not a bad a weekend really, despite the run.
Posted by FitForNothing at 5:00 PM