On the bike today and my legs seemed ok. Well at least until I met that cyclist again and tried to stay with him. In fact I managed to catch him, until he jumped the lights in Stapleford. Tut tut. I wasn’t prepared to do that.

Doggo had a bad morning, getting mugged on the park by a couple of dogs, one of which was the infamous dog with no knees. He’s ok, I don't think he's too psychologically scarred, but I think L might be. As ever it was the owners who annoyed in these situations, standing by, doing nothing and muttering things like ‘he's never done that before’.

MD came out of it the worst and made his injured paw worse by diving in to help. None of which is going to do much for MD’s lack of confidence around other dogs and it’s the last thing Doggo needed two days before his big day at Crufts.

For the second night in a row we’re at Rock City. The first band on, Little Death, are ok, as noisy, feedback favouring indie bands go. They're nothing special or different but probably better than most and as they are probably feeling a bit out of sync with the other acts on tonight, it’s to their immense credit that they go down pretty well. The female bass player has a nice outfit as well, which L kindly points out to me.

I could say that I’ve been looking forward to seeing Ellie Goulding but I’d be lying. Not so some of the crowd who are squeaking ‘Ellie Ellie’ excitedly at a decibel level that thankfully is out of hearing range for most humans, at every opportunity from the moment Little Death have departed the stage.

Perhaps it's my fault for being signed up to too many email lists from ticket agencies, record labels, music blogs, newsletters, websites and the like but the most used two words in such spam recently has been Ellie Goulding. So not hyped much then. Of course she topped the BBC Sound of 2010 poll and won the Critics Choice Award at this year’s BRIT Awards... if that actually means anything... So I best give her allegedly ‘folksy’ voice and acoustic guitar playing a chance, to see if those awards mean she does have something about her after all....

She can probably sing but somebody seems to have advised her no to and to just go for those high notes instead and warble a lot, but the warble soon grates and as Ellie grates her way through number after number it becomes more of a screech. As for her guitar playing, you can’t actually hear it over the other instruments her backing band are playing and after three songs she herself puts it down and doesn’t bother picking it up again. If she can play, then let’s hear her.

Being able to sing/warble/screech is simply not enough when the material she has is so very thin. One incredibly dull song, from her just released debut album ‘Lights’, follows another but I’d had more than enough after the first one and pretty soon the prospect of being trapped in the same room as the woman for half an hour turns into purgatory. Half the crowd seem to agree with me and look bored or in pain, whilst the other half remained sadly heavily into her, including the two girls bouncing the stairs up and down near us.

By the time we get to ‘Under the Sheets’ which at least has a decent bass line, my only thoughts are it must be nearly over... then her hit single, ‘Starry Starry Night’ or whatever it's called, follows and brings her set to its horrific conclusion.

I'm sure she's a nice girl but her show is about as exciting as watching paint dry and if Ellie Goulding was a paint, she'd be Magnolia, she's that dull. 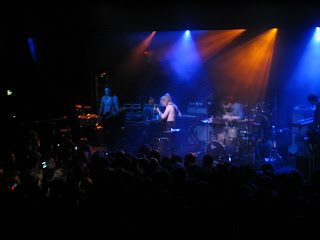 I guess Ellie is here on this tour because she is known to Boston's Passion Pit, having provided guest vocals to the re-released version of ‘Sleepyhead’ but I will try not told hold that against the band, who take the stage next and kick off with ‘I've Got Your Number’. Ah the romance of it. Passion Pit were conceived when Michael Angelakos gave his girlfriend four songs for Valentines’ Day and this was one of them. Not that is worked, well not long term at least, she’s now an ex or he is. He probably doesn’t care, he’s getting all the love and affection he needs from a warm reception from the Rock City crowd tonight.

As they move on and into ‘Make Light’ it dawns on me that this man can do high pitched very well indeed. OMG it's the Mika falsetto again... and there’s not escaping it because Angelakos’s voice drives each song, squeaking us wonderfully through ‘Better Things’. He looks and sings a bit like a chipmunk and probably prances around the stage like on as well. No offence. 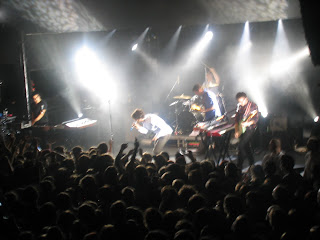 The songs translate far better live than I expected and actually sound better than on CD. They’ve may have lined banks of synths up on stage but the band also make good use of guitars and their sound is more varied than I expected it to be. Plus they have a very impressive light show. Passion Pit come across as a real fun band, having a good time and thoroughly enjoying indulging themselves in front of an audience. An audience, who are enjoying themselves immensely too, there’s plenty of passion down in the pit tonight...

The double header of ‘The Reeling’ and ‘Moth's Wings’ prompts a big sing-along before Angelakos rudely turns his back on us to play ‘Swimming In The Flood’ at his keyboard and it’s the only time he still really.

The crowd repeatedly call for their signature song, ‘Sleepyhead’, and Angelakos seems to get a bit irked by this, pointing out that they have sixteen songs in total, not just one. Well mate, the solution to that is to throw it in early and have conviction in the rest of your material. Conviction that you have something else good enough to round off the night with.

I happen to think they have, this is far from a one track band. The crowd have gotten into every song and not just stuff from their debut album ‘Manners’ either, which is played in almost its entirety tonight, but also their initial EP ‘Chunk OF Change’ from where, to be honest, some their best stuff actually comes from tonight. The particularly lively ‘Smile Upon Me’ from the EP provides probably the best moment of the night when they play it just before set closer ‘Little Secrets’. 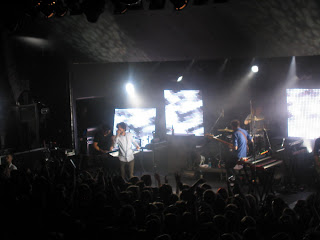 They return for an encore of ‘Eyes As Candles’ before the inevitable ‘Sleepyhead’ finally makes an appearance. Although to be honest, when it arrives, it’s a bit of an anticlimax, not the highlight at all. Have faith in those convictions Michael.

I’m actually a bit gutted about the encore tonight. They have been encoring with a cover of the Cranberries' ‘Dreams’, which would have been worth hearing. Not enough bands throw in a cover version live these days or if they do it’s something so obscure hardly anyone knows it.

Still a very good gig though.
Posted by FitForNothing at 4:00 PM