There Hasn’t Been Much Else To Do

To cap my choice of wrong race over the weekend. I get to work to find that Protégé, who ran Long Eaton on Sunday, was over two minutes slower than last year, so I would almost certainly have beaten him particularly as I’m feeling in form at the moment. Unless of course my presence spurred him on to knock a few extra minutes off but he hadn’t train much for it. Then again had he thought I was going to be there he may have trained harder.

I enquired when his next race was, thinking of a head-to-head, but he said Long Eaton 2011. I think he's avoiding me.

The World Cup is on and in full flow. Well, it’s more of a trickle than a flow. This is perhaps why all the talk is of the vuvuzelas, those annoying horns. People have been complaining in their droves to the BBC, as if it’s their fault. Perhaps most things are but surely not this time. You can’t really blame the supporters, I mean there hasn’t been much else to do whilst the games have been on, you wouldn't really have wanted to watch many of them.

All the same the BBC seem willing to take the rap for it and have said they will consider showing coverage that cuts out the noise of the vuvuzelas on its red button service. If they can tamper with their live coverage like that, then can they also cut out the goalkeeping errors and other bad play when England are on. Thanks. 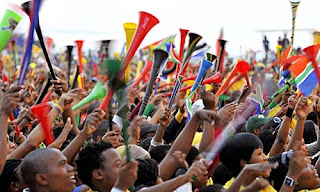 Training tonight for both the boys. Both do well. We have a double header of shows this weekend and I’m quietly optimistic.
Posted by FitForNothing at 4:00 PM