I’m in the car but it would kind of been nice to be on the bus as everyone is whinging about Derby’s bus station at the moment. I said it was too small when it opened and now the owners are suggesting that people aren’t queuing properly and they’re going to paint lines on the floor to show them where to queue. Bizarre. It is true that you often have to get plough through lines of people to get to your bay but I can’t see how painting a few lines is going to help, as there simply isn’t room to queue anywhere. The place just isn’t big enough. 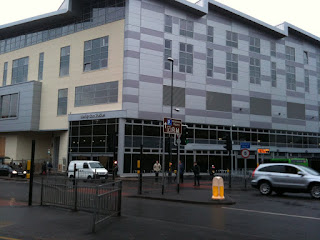 In the evening L comes to dog training with me and she runs over to her Mother’s in Mickleover. Then after training the boys I head over there to pick her up and bring her home.

Both the boys show good form in training, which means I’m really looking forward to the weekend’s events but OMG it’s hot in the arena tonight and we can’t have the doors open in case any of the baby dogs in the beginners class escape. It’s even so hot that our trainer takes her coat off for the first time this year, and I thought L did cold better than anyone. L's had her coat off since May, well a couple of times anyway. At least this unveiling dispels the long running rumour that our trainer has been hiding a pregnancy under that coat. Though to be honest, if the rumour had been true right back from when it started, the child would be at school by now.
Posted by FitForNothing at 4:00 PM