Live At The Kebab Shop

Daughter is out late celebrating the end of the AS exams, which keeps me up. This in turn keeps L up. So then we both oversleep. Yet still somehow I manage, after the problems with the traffic on Tuesday, to get out of the house ten minutes earlier. Consequently I arrive at work a massive half an hour early, as there are no traffic problems. Typical.

In the evening we finally make it up to a venue that I’ve wanted to check out for some time. The Plug in Sheffield. I like it. Some places just have the right ambiance and this place has it in spades. Then there’s the good viewing with a high stage, this always helps. There is no tickets to commemorate the event though, L’s not happy about that, instead she’s printed off the confirmation emails but they'll make rubbish bookmarks. She uses all her gig tickets as bookmarks, this is why she has to keep buying more books, one for each ticket.

First tonight, a local Sheffield band called Starlings. Which if we’re being honest is a really naff name, and a very girlie one at that and there’s no girls in this band. As with a lot of new bands around at the moment there’s something a bit 80s about them with their bass and synth pop sound. That said they’re rather good and seem determined to make the most of their stage time. They rattle through their songs in a hurry and it makes for quite a breakneck half hour. 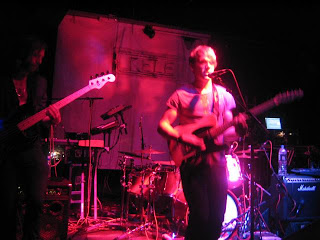 Front man Justin Robson is a strong vocalist, albeit one with terrible knicker line, that is one above his low slung trousers. I’m not at all keen on how he keeps waggling his underwear at us. Thankfully it’s not quite enough to put you off the music.

L’s a big fan of Kele Okereke, so I valiantly save her from seeing him at Gatecrasher in Nottingham with the voddi swilling teenagers and take her to the more refined surrounding of the Plug instead. Of course I like Kele too, well I like Bloc Party but haven’t been too impressed with their direction of late, they have been heading deeper and deeper into dance music. L adores all the electro stuff, I don't, but I thought the main man Kele with just a guitar would be a good way for him to get back on track... unfortunately (for me) that is not the track he intends to be on.

Tonight, there’s barely a guitar in sight and for me the best music = guitars. Instead Kele surrounds himself with electronics, a wealth of percussion and a new three piece band, so this is actually Kele far from being solo. They all take the stage to the sounds of Gary Numan’s ‘Airlane’ and beneath a big neon sign with Kele's name on it. A sign that makes him look a bit like the proprietor of a kebab shop as he delivers the first number ‘Walk Tall’, also the opener to his forthcoming debut album, ‘The Boxer’. 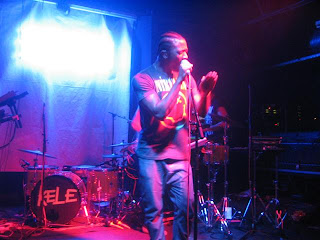 ... and yep it’s all very dancey, as too is the next track ‘On The Lam’ but pleasant, in a dancey sort of way. The third track ‘Meet Me In The Middle’ is a bit different, with a slower introduction and those famous yearning vocals of his. His vocals are also supplemented by the lovely Lucy, his new keyboard player and added eye candy, whom Kele seems to be rather fond of despite the fact he’s not supposed to be of that persuasion. 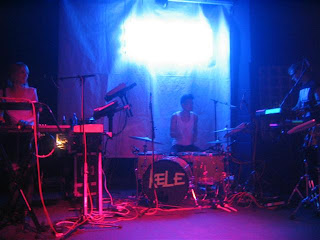 So far Kele hasn’t even touched an instrument but he pitches in with the maracas for ‘The Other Side’. He doesn’t seem to miss his guitar, preferring to be a free spirit, jumping around to his own music and interfacing with the crowd. Perhaps this is his way of letting his hair down or it would have been if he’d not had it all cut off.

Then there’s a treat for the ‘home of knives and forks’, as Kele announces a medley of tracks from a band I ‘used’ to be in. Oooh, Freudian slip... That’s not good news for a band who are supposed to be on a year’s sabbatical. He dishes out ‘Blue Light’, ‘The Prayer’ and ‘One More Chance’ segued together, it turns a so far simply appreciative crowd in to lively one and warms them up for his debut single ‘Tenderoni’ which follows. Its pounding synth beat goes down equally well and almost everyone knows the words. Well suppose they’re not hard to grasp, if you can spell. T-E-N-D-E-R-O-N-I. See! Even I know it.

Then Kele dabbles in a little bit of guitar and I mean a little bit, for the intro of the closing ‘Rise’. It’s only to lay down the backing track, that he records ala Voluntary Butler Scheme. ‘Rise’ is a good closer and my favourite of the night. 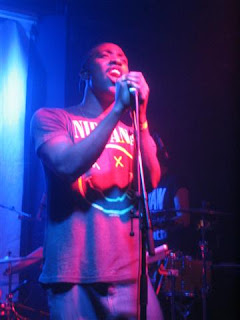 He’s clearly enjoying himself and is already over running his allocated slot by the time he returns for an encore. Which he opens with the Bloc Party rarity ‘Your Visits Are Getting Shorter’. He’s overrunning so much that he has to cull a song from the encore. On asking the crowd what they’d like to hear, they opt for the Bloc Party song ‘Flux’ rather than a new song, which is predictable but disappointing.

He’s good but after a promising start it turned into too much of a Bloc Party covers night and that was a shame. There was simply not enough of his own stuff if he’s supposed to be promoting his forthcoming album. If I was you mate, I’d cut out the medley in the main set and play a couple of new songs instead. Then the show would just about have been as perfect as you can get (without a guitar) and still not good news for the rest of Bloc Party.
Posted by FitForNothing at 4:00 PM