It’s Son’s last A Level exam today. Then he’s a free man, until mid October. The holidays just seem to get longer. He’s also mega confident. He reckons if he doesn’t turn up to the exam he’ll get an overall C but if he turns up and puts his name on the form he’ll get a B. Hopefully if answers a question or two then he might get an A?

It’s the third of the four Grand Prix runs tonight and I notice on the results that I’m in 25th place overall after the first two races. Not bad.

L complains that she meant to bring a sports drink to work but forgot. Blimey, that’s taking it a bit seriously. She says her personal trainer's a tough cookie. Who’s that then? Me? Although she has been talking of two timing me with a more qualified model, a real personal trainer.

I’m on the bus and I notice at the bus station they’ve now put messages on the information screens telling you where to queue. This is after the managers complained that people weren’t queuing in the right place. So the screens now spend half their time telling you what to do rather than giving out bus times. Not that the bus times are right anyway. The screens are not linked to the live bus times service that tracks actual progress of the bus and are currently merely showing the scheduled timetable. This, and not where to queue, should be priority number one to be sorted out. We know the majority of this information is available because a lot of the bus stops in Derby (the Trent Barton ones) and all the stops in Nottingham already show live times. 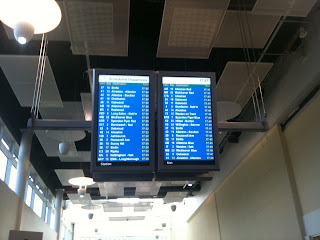 L gets home with a box of biscuits that were a freebie from work. They'll be coming to me then. Yep. She hands them over. I’m required to save her from herself again and before she does something stupid with them post-race.

Race three, Wollaton Park and a mere 5k. It goes well. After we find the start that is, we both forget that last year they moved it to a different part of the park. It also means we get a good warm-up as we have to leg it to the start.

As ever this is a fast race. A lot of people see this as a sprint all the way from the start to the finish line. My times for the first two kilometres, both around 3:35, suggest I might even be one of them. The second half though is harder as the course gets hillier and is therefore slower. My sub-4 minute times become over 4 minute ones. It’s still a good pace though and my time at the finish is my fastest here, in four attempts, by ten seconds. After finishing in the same position at the first two races, tonight I’m one place higher. Mr Consistent.
Posted by FitForNothing at 4:00 PM