Putting A Few Noses Out Of Joint

I take the boys for a Bank Holiday stroll on the park. This includes MD, who now seems back to normal, much to everyone’s delight. They’ll soon wish he wasn’t.

This team management lark isn’t so bad. In 24 hours I have raised one team and am well on the way to getting a second team together. The previous team manager hadn’t got this far in three months. I have to deal with a few squabbles though, along the lines of ‘I won’t run in team if so and so does’. It’s just like organising the six-a-side team that I used to be involved with. I might even end up recruiting a few new members for the club, which has got to be good surely. Although new members going straight into the team and potentially to Crufts might put a few noses out of joint. Hopefully. They only have themselves to blame for not making themselves available.

After de-gritting the inside of the car followed by a quick pedal/run at the gym we head down to Rock City for a gig.

By delaying her entry until 8.30 Sarah Blasko risked being upstaged by the impromptu balloon show organised by the impatient crowd. Then once on stage it takes an age to get her band’s double bass booted up, or whatever you do with a double bass. Finally she gets started.

I was worried we'd get an Australian Ellie Goulding but she's more of a Florence, with a touch of Cerys Matthews thrown in. Well, perhaps more than just a touch as it happens. Overall, her sound is a simple mix of drums, keyboard and double bass with only a light sprinkling of guitar and the occasional banjo. A blend that lets her strong vocals shine through. 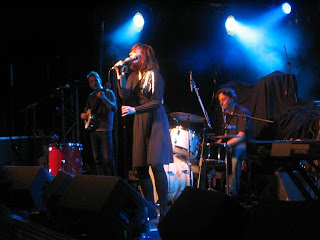 Her tunes are generally quite mournful and her rockiest moment comes during the closing 'No Turning Back', which is perhaps pure Florence but then I have a suspicion that Sarah Blasko got there first. Her rather long 45 minute set doesn’t drag and she’s entertaining but frankly, just not my type.

After the resumption of the now rather tedious balloon show, fellow Aussies The Temper Trap take to the stage and open with something, according to their set list, imaginatively called 'Intro'. This is basically a jamming session for the band but is actually rather good. Then it’s into ‘Rest’ and a trawl through every track on their debut album and solitary release, last year’s ‘Conditions’. 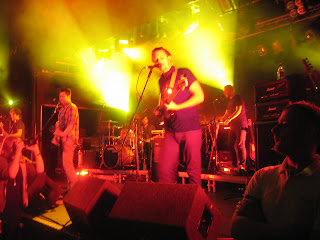 ‘Fader’ is a real crowd pleaser, vocalist Dougie Mandagi singing in the highest pitch I’ve heard since Jimi Somerville warbled Smalltown Boy but it’s the band I find most impressive, at times they pile three guitars on top of Mandagi's distinctive voice. Bassist Jonathon Aherne was entertaining in his own right, as he bobbed around the stage, and his long hair, piled weirdly on top of his head, bobbed along with him.

‘Sweet Disposition’ has frankly been everywhere in the last year, in numerous TV adverts, repeatedly used as background music for, well, practically anything and it even featured in the film '500 Days of Summer'. In fact, you only had to be walking down the street and it would come up behind you and tap you on the shoulder. Tonight though it seems to creep up on the crowd with an elongated teasing introduction, before exploding into life. 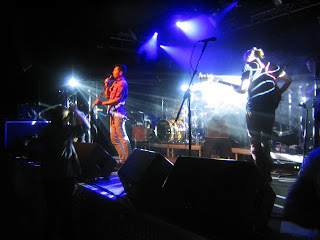 After which they closed the set with ‘Resurrection’ amidst a blinding light show, ‘Resurrection’ like ‘Down River’ which was played earlier, builds up gradually in layers towards a grand finale. They then segued this into another jam session that turned out to be 'Drum Song'. The band letting themselves go like they did on the equally instrumental opener and we get our first crowd surfer of a so far quiet evening for the security staff.

Dougie pours a bottle of water on to the solitary snare drum that he is playing and then illuminated by strobe lighting, he bangs the drum so that the water splashes up high, to quite impressive effect.

They depart after almost 50 minutes on stage, which is only marginally longer than Ms Blasko but after a short break they return. The break being just long enough to give the roadies time to mop up the water from the stage. 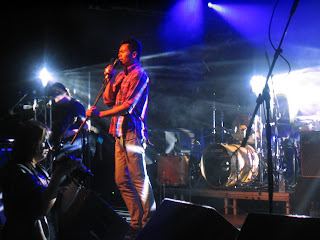 For the encore, they play a new song called 'Rabbit Hole’; again it’s another song that starts slow and builds up, something that seems to be a bit of a trademark style for them. They leave us with their most recent single, 'Science of Fear', and Dougie again gives security something to do by seemingly trying to hug as many of the crowd as possible.
Posted by FitForNothing at 4:00 PM